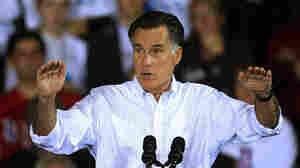 October 29, 2012 • A new Pew Research Center poll shows that among likely voters, the race is now a statistical dead heat with both President Obama and Mitt Romney receiving 47 percent support. And while Obama holds a slight edge among those registered to vote, a higher percentage of Republicans than Democrats say they actually plan to do so. 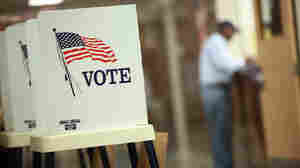 Early voting has begun in the battleground states of Ohio, Virginia and Iowa. Voting booths were set up for early voting Thursday at the Black Hawk County Courthouse in Waterloo, Iowa. Ahead of Wednesday's first presidential debate, an NPR poll finds President Obama with a 7-point lead nationally, but his GOP challenger, Mitt Romney, is within striking distance. Scott Olson/Getty Images hide caption

October 3, 2012 • The latest poll by NPR and its bipartisan polling team shows President Obama with a 7-point lead among likely voters nationally and a 6-point lead in the dozen battleground states where both campaigns are spending most of their time and money. But battleground voters were also more downbeat about the direction of the country.

June 22, 2012 • Bloomberg set off something of a firestorm with a poll that found President Obama leading Mitt Romney by 13 points, when most polls show the race much tighter. Now, the pollster is offering a point-by-point explanation.

Catholics, Contraception and the Consequences of Poor Poll Reporting

March 6, 2012 • An NPR report failed to cite Planned Parenthood as the sponsor of a poll on the birth control insurance mandate and interpreted the results questionably. A second report repeated an error in a Guttmacher press release on birth control use by Catholic women and never cited Guttmacher. Critics charged liberal bias. What happened? What's the impact?

May 3, 2011 • Past presidents have gained in public standing after ordering bold and successful military actions. But the effect rarely lasts long enough to help a president's re-election chances or his party hold onto the White House.

October 7, 2010 • New Yorkers are angry but not as much as GOP governor nominee Carl Paladino who's falling in polls. Andrew Cuomo's opened up a larger lead on Paladino whose public confrontation with a reporter appears to have hurt him.

House Race Sampling Shows GOP Lead In 11 Of 12 Contests But...

October 6, 2010 • A new survey of 12 congressional districts found GOP challengers leading in 11 of the contests. But the races were much tighter than many experts expected at this stage, with many of the small Republican leads within the margin of error.

September 16, 2010 • In a Rock the Vote poll, young voters said they expected to be financially better off than parents.

Is NPR Not Covering Obama's Slip in the Polls?

January 22, 2010 • A conservative media watchdog site, newsbusters.org, criticized NPR for not reporting on a poll that showed how President Obama had slipped in the polls. The Ombudsman's office looked into this and found something different.