Flashback Friday: On This Day In 2007, Lieberman Endorses McCain For President 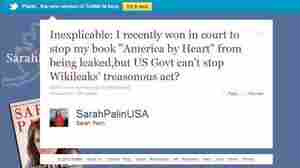 November 29, 2010 • The Republican ticket from 2008 says the leaking of diplomatic messages and other data is dangerous. Palin calls it "treasonous." 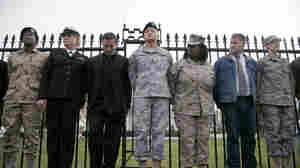 Lt. Dan Choi, center, stands with other protesters after handcuffing themselves to the fence outside the White House in Washington, Monday, Nov. 15, 2010, during a protest for gay-rights. The group demanded that President Obama keep his promise to repeal 'Don't Ask, Don't Tell'. Pablo Martinez Monsivais/AP hide caption

November 18, 2010 • Senate Majority Leader Harry Reid says he will hold a vote on the repeal of the ban on openly gay service members after the Thanksgiving recess. 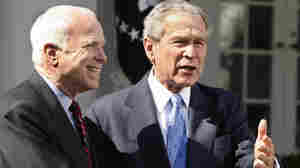 November 10, 2010 • A story by the Financial Times about what the former president supposedly said has gotten lots of attention, but isn't true, a spokesman for Bush says. 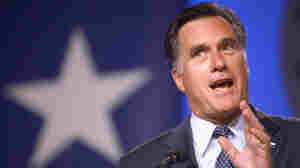 Mitt Romney Could Be The Hillary Clinton Of 2012

September 20, 2010 • ANALYSIS: The former Massachusetts governor, an early frontrunner for the 2012 GOP presidential nomination, must be hearing tea cups as he tries to set the stage for his next presidential bid.

August 25, 2010 • Once thought to be vulnerable, Arizona Sen. John McCain abandoned some old positions and soundly defeated former Rep. J.D. Hayworth in the Republican primary.  McCain is now favored to win a 5th term in November.

July 14, 2010 • Jersey Shore star Snooki and Sen. John McCain have become fast friends, digitally. But Republicans shouldn't hope for her take on anything beyond the tanning tax. 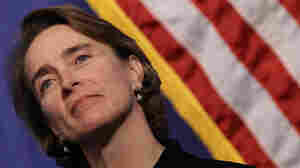 Democratic Sen. Blanche Lincoln of Arkansas must survive a runoff to be on her party's ballot in November. Mark Wilson/Getty Images hide caption

May 28, 2010 • If you're wondering how scary the anti-incumbent tide looks to incumbents, ask any U.S. senator on the ballot this year. But hurry, the species is endangered.

April 26, 2010 • Arizona has passed the strictest immigration measure in the nation. Will it finally get Congress to act on the issue?

October 21, 2009 • Jack Jackson became the first African-American Heavyweight Champion of the World in 1908. Among Johnson's detractors were those who thought him to be unworthy of the title and its notoriety because many of the champion's (defeated) opponents were ...

The Obamas Drop In On The Bushes

October 29, 2008 • Last call for Political Junkies... only six days until the country votes for a new president, what do you expect to happen in the coming days?