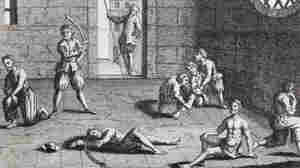 This copper engraving from approximately 1700 depicts the condition of the English prisoners at the hands of the Dutch. In the 1660s, Cornell University's Eric Tagliacozzo says, the conflict and competition for the spice trade came to a head. "The Dutch decapitated a number of English merchants who were also in the Spice Islands trying to profit from the trade." WikiCommons hide caption

November 26, 2012 • Nutmeg is a feel-good holiday spice found in cakes and cider, and even spiking our spinach, if we're lucky. But it once caused serious bloodshed and may have even been a reason the Dutch were willing to part with Manhattan back in the 1600s. 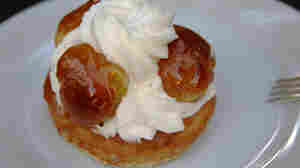 The author pauses to photograph the St. Honore cake before she digs in. Deena Prichep hide caption

May 16, 2012 • Pictures of Saint Honore or (Saint Honoratus) from church iconography reinforce his baker background. He's holding his wooden peel, often with a few delicious-looking loaves of crusty French bread nearby.

Send us your 'Attitudes of Gratitude'

November 14, 2007 • As the Thanksgiving holiday approaches, we're looking for heartwarming experiences from YOU to possibly share with our audience...