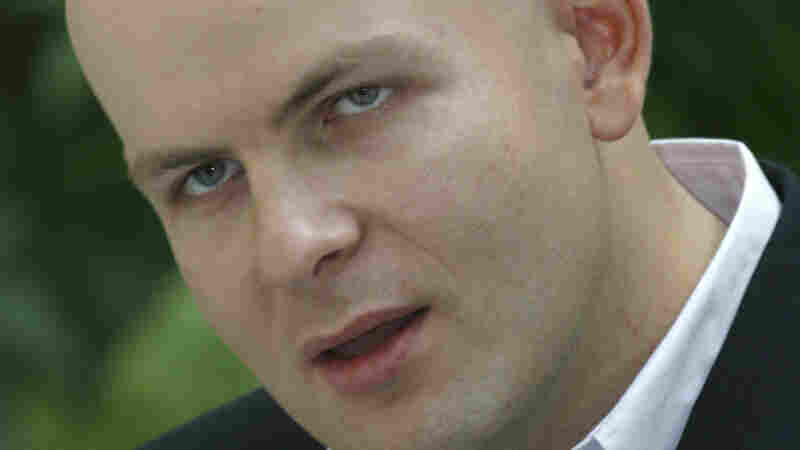 Oles Buzyna, a Ukrainian journalist seen here in 2012 who was known for his pro-Russia views, was gunned down in broad daylight in Kiev on Thursday. Sergei Vaganov/AP hide caption

April 16, 2015 • Oles Buzyna was gunned down in broad daylight in Kiev, one day after a former pro-Russia lawmaker was found dead there. The Ukrainian government is calling for a quick and transparent investigation. 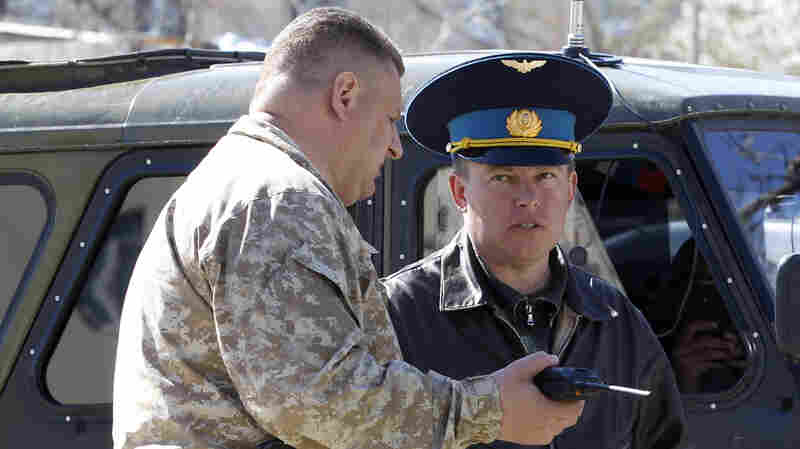 A Russian military officer, left, talks to Ukrainian Col. Yuli Mamchur before the Russian takeover of an air base near the Crimean town of Belbek on Saturday. Vasily Fedosenko/Reuters/Landov hide caption

Major Ukrainian Air Base In Crimea Handed Over To Russia

March 22, 2014 • One of the last important military installations in the region that was still at least partially under Ukrainian control is now firmly in Russia's hands. 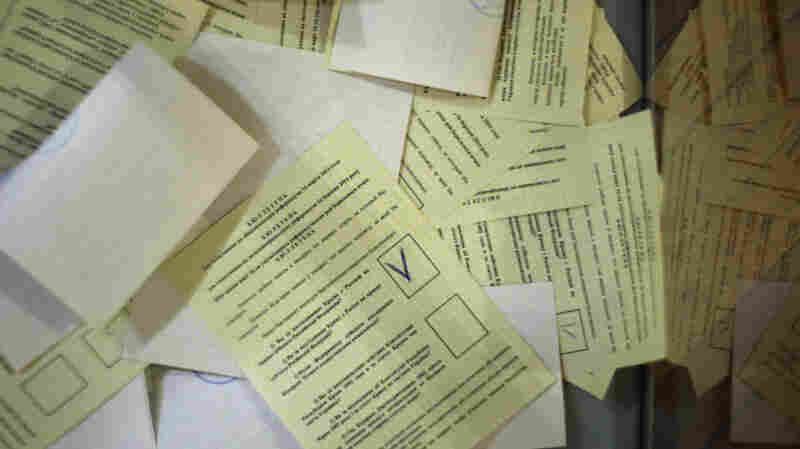 A pile of the votes cast Sunday in Simferopol, Ukraine, the regional capital of Crimea. Dan Kitwood/Getty Images hide caption

March 17, 2014 • President Obama says the U.S. will not recognize Crimea's moves to split from Ukraine. In Moscow, President Vladimir Putin signs an order recognizing Crimea as an independent state. 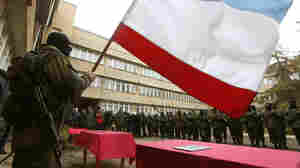 A masked man, believed to be a Russian soldier, holds a Crimean flag as members of a pro-Russian self-defense unit stand in formation Monday in the regional capital of Simferopol. Vasily Fedosenko /Reuters /Landov hide caption

March 11, 2014 • Tensions continue to build in advance of a regional referendum on Sunday. Crimeans will be asked whether they wish to split from Ukraine and join the Russian Federation. 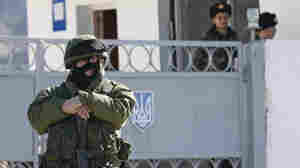 March 3, 2014 • President Vladimir Putin's forces have effectively taken over the peninsula. Now, the world is watching anxiously to see if Russian troops move into other parts of Ukraine. 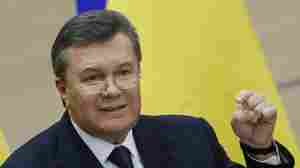 February 28, 2014 • Viktor Yanukovych appears in public for the first time since he fled Ukraine. At a news conference in Russia, he insists he's still his nation's leader and says he left after his life was threatened. 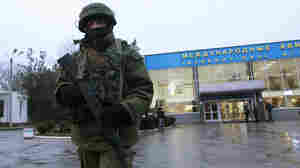 Crisis In Ukraine: Gunmen At Airport; Yanukovych Vows To Return

February 28, 2014 • Russian officials say the men in unmarked uniforms are not from their forces. Ukrainian authorities say otherwise. The ousted president is in Russia and says he will "fight" for his nation's future. 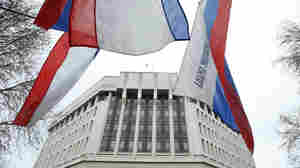 Flags fly outside the Crimean parliament building in Simferopol on Thursday during a rally by pro-Russian protesters. Gunmen seized government buildings in the city. David Mdzinarishvili /Reuters/Landov hide caption

On the NPR Newscast: Peter Kenyon reports from Kiev 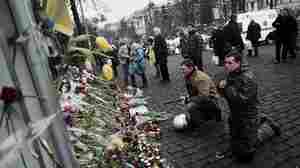 Praying For Those Who Died: Mourners were in Kiev's Independence Square again on Tuesday. It was the site of protests in recent months, and was where more than 80 people died last week in violence blamed on security forces. Louisa Gouliamaki /AFP/Getty Images hide caption

Crisis In Ukraine: Formation Of New Government Is Delayed

February 25, 2014 • While the search continues for ousted President Viktor Yanukovych, officials are working to fill the posts left vacant after his removal from office. 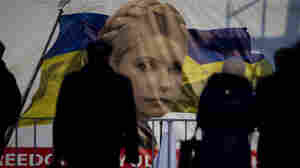 People pass by a portrait of prominent opposition leader Yulia Tymoshenko at Independence Square in Kiev, Ukraine, on Monday. Tymoshenko, a former prime minister, is one of the leaders who have emerged after the ouster of President Viktor Yanukovych, but she is also a controversial figure. Marko Drobnjakovic/AP hide caption

February 24, 2014 • The deposed president is on the run. There's uncertainty over who will emerge as the country's new leader. Its economy is in shambles. And Russia and the West are divided over what they want. 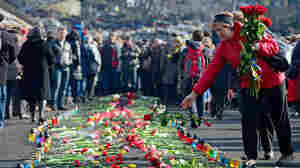 In Kiev's Independence Square, flowers have been left in memory of protesters killed there in recent days. Jeff J Mitchell/Getty Images hide caption

February 24, 2014 • Ousted from office, Viktor Yanukovych is now missing. The acting interior minister says authorities want to arrest Yanukovych and try him for the deaths of scores of protesters last week. 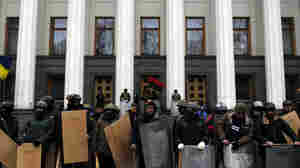 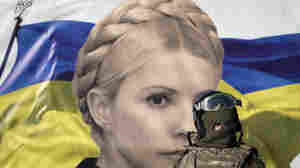 In Kiev last month, this anti-government protester in protective gear stood in front of a poster featuring an image of former Prime Minister Yulia Tymoshenko. Her jailing on what supporters believe were bogus charges was among the complaints protesters raised. Darko Bandic/AP hide caption

February 21, 2014 • Yulia Tymoshenko has been a critic of President Viktor Yanukovych. Supporters say she was put in jail on trumped-up charges. Now, parliament has voted to decriminalize the law she allegedly broke. 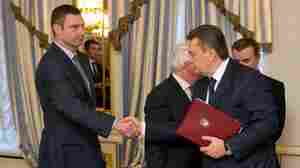 February 21, 2014 • The deadly crisis may be coming to an end. President Viktor Yanukovych and three leaders of the protests against his government agreed on a plan for a unity government and new elections. 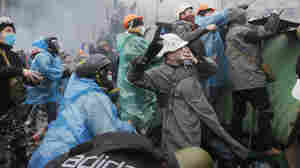 February 19, 2014 • The big question is about the country's future: Will the former Soviet republic move closer to the EU or remain in Russia's orbit? 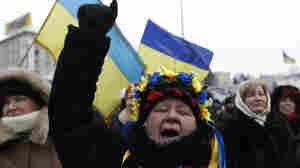 January 28, 2014 • The prime minister is quitting. Anti-protest laws have been repealed. Moves are being made that may give protesters amnesty. But the opposition says it will remain in the streets until the government agrees to its demands, which include new elections. 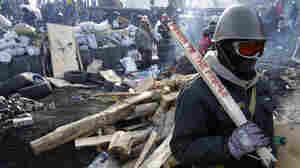 January 27, 2014 • The offer comes after anti-government demonstrations spread to cities where the citizens have shown support for the president. Meanwhile, the nation's justice minister has warned she may declare a "state of emergency" unless protesters leave her headquarters. 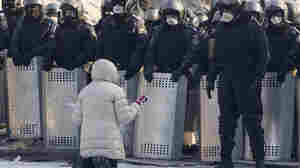 On Friday in Kiev, a woman knelt as she appealed to Ukranian police troops at the site of clashes with anti-government protesters. Gleb Garanich /Reuters/Landov hide caption 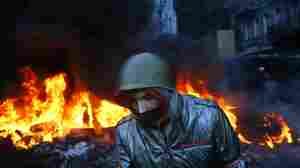 In Ukraine, Protesters Warn They'll Go 'On The Attack'

January 23, 2014 • Clashes with security forces turned deadly Wednesday. Two demonstrators were reportedly shot and killed. The body of another was later found. Protesters have been demanding that President Viktor Yanukovych hold early elections. They've given him one more day to agree. 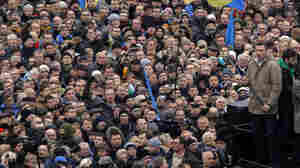 Vitali Klitschko, head of the opposition UDAR party, waves a flag during a rally in downtown Kiev, Ukraine, on Dec. 1. The WBC heavyweight boxing champion has emerged as one of Ukraine's most popular political figures, as massive anti-government protests grip the country. Sergei Grits/AP hide caption

December 9, 2013 • Vitali Klitschko has emerged as one of Ukraine's most popular opposition figures, in part because he earned his wealth in the ring and appears to be untouched by the country's corruption scandals. The boxer known as "Dr. Ironfist" has his eye on the presidency, but there are concerns about his lack of experience.

There Must Be A Petty Bureaucrat To Blame For This!

May 19, 2010 • Ukrainian president gets attacked by a hilarious wreath during ceremony with Russian counterpart.