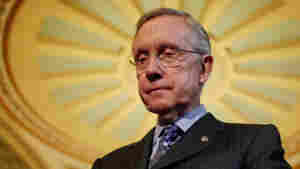 September 26, 2011 • Lawmakers in Washington are still at odds over how to put some more money into the coffers of the stretched-thin Federal Emergency Management Agency. If the dispute isn't settled by the end of the week, part of the government might have to shut down. 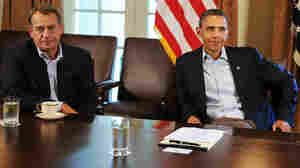 In Their Words: Obama, Boehner On Taxes

September 19, 2011 • While the president makes the case that reform means millionaires shouldn't pay at lower rates than those in the middle class, the House speaker says "tax increases destroy jobs." 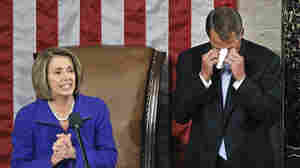 V.P. Boehner? Not If He Has To Go To Funerals

September 15, 2011 • "It's hard enough for me to go to funerals of people I know, much less don't know," says the House speaker, who's known for his habit of tearing up.

September 15, 2011 • In an address this afternoon, the Republican lawmaker makes the case for lowering the corporate tax rate and closing loopholes.

September 9, 2011 • The Treasury secretary makes the case for the plan. But some top Republicans say the latest proposal from the administration wouldn't boost job growth. 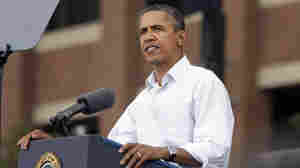 September 7, 2011 • Sources familiar with what the White House is considering tell the AP the president will call for a one-year extension of a payroll tax cut for workers and an extension of expiring jobless benefits. Republican leaders ask for a meeting with Obama.

Obama's Speech Will Need To Be Early (Or Short?) To Avoid NFL

September 1, 2011 • While much of the media is focused on the back-and-forth over when the president will speak to Congress, other top stories include revelations about secret CIA flights and the latest on the conflict in Libya.

Partisans Pick Up Where They Left Off

August 31, 2011 • Job creation may be the biggest issue facing the nation this fall, but it's not what set off the latest test of wills between the White House and Republican leaders of Congress on Wednesday.

August 31, 2011 • "It is my intention to lay out a series of bipartisan proposals that the Congress can take immediately," the president says in a letter to House Speaker John Boehner (R-OH). Obama asked to speak on Wednesday. Boehner suggests Thursday instead. 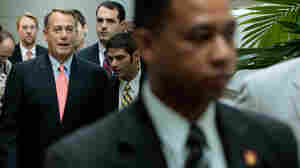 July 29, 2011 • The addition of the amendment provision to the debt-ceiling measure appears to be enough to swing some Republican lawmakers to his side who had previously been against the speaker's bill.

July 19, 2011 • David Brooks has a New York Times column Tuesday that, like an earlier column, is getting attention as almost an open letter to establishment Republicans to take back their party from the Tea Party wing. 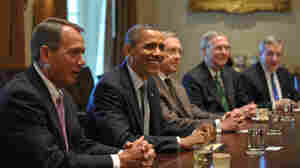 July 18, 2011 • Deficit-reduction negotiations continue. A deadline looms. But beyond that, not much is certain about what will happen.

Lawmakers On Call Through Weekend For More Budget Talks

July 15, 2011 • With the Aug. 2 deadline approaching, lawmakers are also working on a plan that would give the president authority to raise the federal debt ceiling. The president is due to hold a news conference about the budget discussions later this morning.