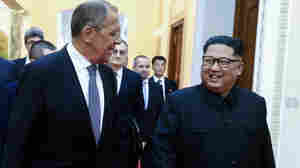 May 31, 2018 • "I highly value the fact that Putin's administration strictly opposes the U.S.' dominance," Kim said, according to Russia's state-run Tass agency. 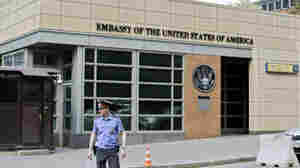 A Russian policeman stands in front of an entrance to the U.S. Embassy in downtown Moscow in 2013. Ivan Sekretarev/AP hide caption

August 21, 2017 • The move is the latest in a tit-for-tat between Washington and Moscow triggered by U.S. sanctions on Russia for its interference in the 2016 U.S. election. 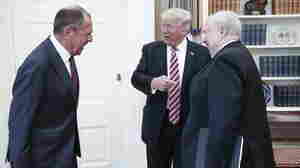 May 10, 2017 • One day after firing FBI Director James Comey, the president shakes hands with the Russian ambassador who's a key figure in the investigation into ousted national security adviser Michael Flynn. 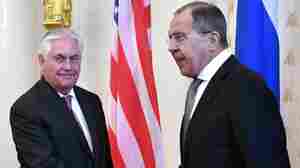 Secretary of State Rex Tillerson shakes hands with Russian Foreign Minister Sergey Lavrov at the start of their meeting in Moscow. Russia has accused the U.S. of breaking international law with its missile strike on Syria last week. Alexander Nemenov/AFP/Getty Images hide caption 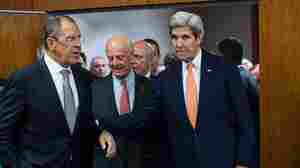 September 9, 2016 • The agreement, announced by U.S. Secretary of State John Kerry and Russian Foreign Minister Sergey Lavrov, will be put into place beginning at sundown on Monday. 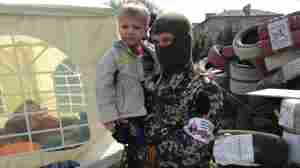 A masked guard holds a young boy at a barricade outside a building being held by pro-Russia forces in Donetsk, Ukraine. Eleanor Beadsley/NPR hide caption

Ukraine Calls An Easter Truce In Clash With Militants 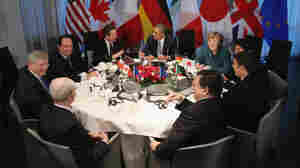 March 24, 2014 • President Obama and other leaders of the world's biggest industrialized nations say they're not going to summit with Russia in June. 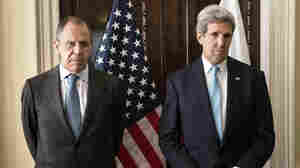 Russian Foreign Minister Sergei Lavrov, left, and U.S. Secretary of State John Kerry before their talks Friday in London. Afterward, they reported no breakthroughs on finding a solution to the crisis in Ukraine. Brendan Smialowski/AP hide caption

March 14, 2014 • Crimeans vote Sunday on whether to split from Ukraine. The U.S. and its allies vow to penalize Russia if it continues to intervene. Secretary of State Kerry met with his Russian counterpart Friday. 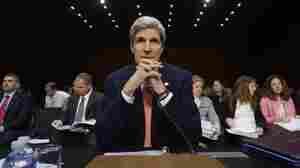 As Vote In Crimea Nears, Kerry Has Words Of Warning For Russia

March 13, 2014 • The crisis in Ukraine continues. On Sunday, there's a referendum in Crimea about whether to split from Ukraine and join the Russian Federation. 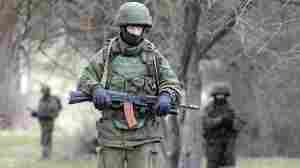 Armed men in unmarked military uniforms — who witnesses believe are Russian troops, but who Russian leaders say are "local self-defense" forces — stand outside the territory of a Ukrainian military unit in the Crimean village of Perevalnoye. Maxim Shipenkov /EPA/Landov hide caption

March 5, 2014 • There was no one-on-one meeting between the Russian and Ukrainian foreign ministers, but Secretary of State John Kerry said all sides agreed the impasse in Crimea must be resolved through dialogue.

Russia Says It Will Implicate Syria's Rebels In Chemical Attack

September 18, 2013 • Foreign Minister Sergei Lavrov says Russia will bring evidence to the U.N. Security Council. Russia is still, though, working with the U.S. to get Syrian President Bashar Assad's regime to give up its chemical weapons. 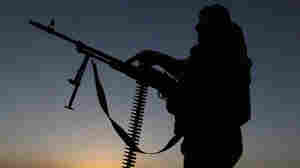 September 12, 2013 • Russia is "playing games. ... They know that the regime in Damascus is a criminal regime," Gen. Salim Idris tells NPR. Many Syrians, he says, "can't understand why the Russians and Iranians are supporting the [Assad] regime" and why "our friends are delaying" in coming to the opposition's aid.

While Gunfire Echoes Inside Syria, A Cry For Help From A City Under Attack

February 7, 2012 • "We are asking for [an] SOS," says blogger and citizen journalist Omar Shakir from inside Homs, as heavy machine gun fire echoes in the background. He and others in the city say government forces continue to kill people there.