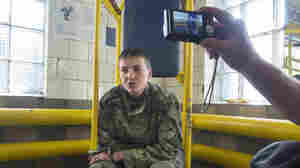 Ukrainian military officer Nadezhda Savchenko speaks to journalists shortly after her capture in Luhansk, Ukraine, on June 19, 2014. She was apparently captured by pro-Russian insurgents during fighting in eastern Ukraine. But she is being held in Russia, which claims she was arrested in that country. Ukrainian officials say the separatists handed her over to Russia. Igor Golovniov/AP hide caption

January 18, 2015 • Russia is jailing three prominent figures from Ukraine and Estonia on what critics say are highly questionable charges. The cases also reflect the friction between Russia and its neighbors. 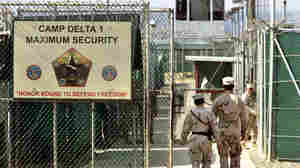 In this June 27, 2006, file photo U.S. military guards walk within Camp Delta at the Guantanamo Bay U.S. Naval Base, Cuba. The U.S. announced the transfer of four detainees from Guantanamo to Oman; one will go to Estonia. Brennan Linsley/AP hide caption

January 15, 2015 • The transfers, announced late Wednesday, bring to 122 the number of detainees who remain at Guantanamo Bay. The move comes amid GOP opposition, citing security, to freeing prisoners from the facility. 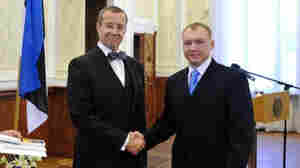 September 14, 2014 • It could be the next big spy movie: an Estonian intelligence agent nabbed by Russia on spy charges. Russia says he was spying on them; Estonia says he was kidnapped in a cross-border raid. 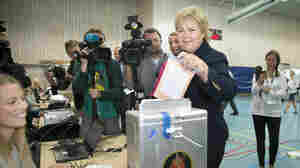 During the 2013 elections, online voting was an option in Norway. Even so, Erna Solberg, chairman of the Conservative Party of Norway, casts an old-school ballot. NTB Scanpix/Reuters/Landov hide caption

June 27, 2014 • After trying out online balloting in elections in 2011 and 2013, Oslo has concluded that it didn't improve turnout and might undermine the democratic process. 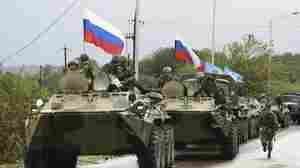 A column of Russian troops prepares to leave the checkpoint at a bridge over the Inguri River in Western Georgia, in October 2008, after securing the secession of Georgia's breakaway South Ossetia region. Levan Gabechava/Reuters/Landov hide caption

March 19, 2014 • From the Baltic states to Central Asia, plenty of former Soviet satellites have large populations of ethnic Russians — and more than a few of them are yearning to be free. 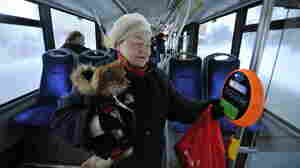 Residents of the Estonian capital of Tallinn can use public transportation for free after purchasing a special card for 2 euros. Raigo Pajula/AFP/Getty Images hide caption

June 12, 2013 • The Estonian capital is dotted with medieval towers and Soviet architecture that belie its status as one of the world's most technologically advanced cities. Residents use a smart card to ride the bus, and mail packages and pay for parking with their phones.

Estonia And The Wisdom Of The Ages

June 4, 2012 • How old we really are, with accumulated wisdom if we will be wise enough to heed it.

August 16, 2011 • Despite the euro's troubles, Estonia's still doing well. It has the highest growth rate and the lowest public debt of any EU country.On today's podcast, we talk to Estonia's president.

January 18, 2011 • On today's show, we bring you the story of one country that played by the rules and did everything exactly the way they were supposed to. One country that worked tirelessly to gain access to the special club of the euro — Estonia.