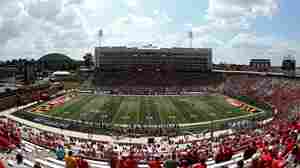 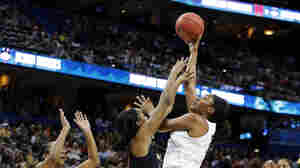 April 5, 2015 • Basketball powerhouse UConn has a chance at their 10th title after beating Maryland 81-58. They'll meet Notre Dame, who defeated South Carolina by one point earlier Sunday, in Tuesday's finals. 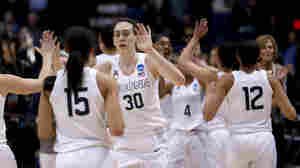 Raise your hand if you're not bored with winning: Connecticut's Breanna Stewart and teammates celebrate their 91-70 victory Monday over Dayton during a regional final game in the NCAA women's college basketball tournament in Albany, N.Y. The victory sent the team to its eighth straight Final Four, where it will pursue its third straight title. Mike Groll/AP hide caption

March 31, 2015 • Connecticut is back for the eighth straight year, Notre Dame for the fifth and Maryland returns for a second straight year. South Carolina is making its first appearance.

February 20, 2014 • The records from staff, faculty and students date back to 1998 and include social security numbers, names and dates of birth.

The Hard Life Of Small Planets

September 10, 2012 • New results from research by the University of Maryland and the Tokyo Institute of Tecnnology indicate that our solar system may, in fact, be quite unusual.

More from University of Maryland