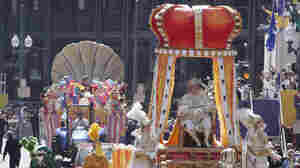 Paul C.P. McIlhenny reigns as Rex as he arrives at Canal Street during Mardi Gras celebrations in New Orleans on Feb. 28, 2006, six months after Hurricane Katrina devastated the city. McIlhenny, the CEO and chairman of the company that makes Tabasco sauce, died Saturday in New Orleans. He was 68. Alex Brandon/AP hide caption

February 24, 2013 • Paul C.P. McIlhenny was the sixth member of his family to be named president of the McIlhenny Co., which makes the iconic hot sauce. He was 68 years old.