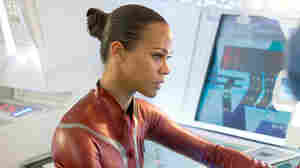 The 'Star Trek' actress had to be talked into the role of Lt. Uhura in the franchise's big screen reboot by her mother and friends. The original Lt. Uhura was urged to not quit by Martin Luther King. Paramount Pictures hide caption

April 8, 2013 • The 'Star Trek Into Darkness' actress almost passed on the role — just like Nichelle Nichols, the woman who made it famous.