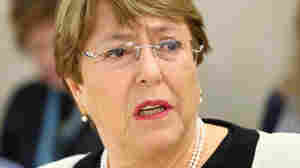 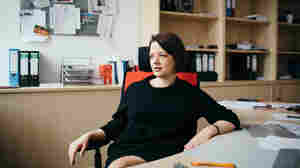 February 9, 2017 • Carmen Bachmann, a professor in Leipzig, is building an online network to help political refugees who are scientists or social scientists connect with professional peers in Germany — their new home. 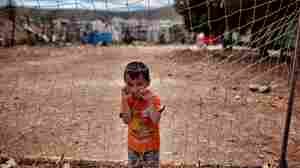 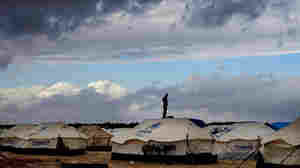 A Syrian refugee stands on top of a water tank at the Zaatari refugee camp in Jordan in 2013. While the surge of Middle Eastern refugees into Europe has grabbed world attention this year, most refugees find shelter close to their homeland, where they often remain for many years. Mohammad Hannon/AP hide caption

October 10, 2015 • The surge of refugees into Europe this year can give the impression that the Continent is the leading destination. In reality, most flee to neighboring countries and remain for years, if not decades. 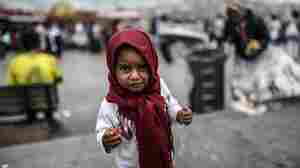 August 29, 2014 • The number of refugees from the Syrian civil war is on the verge of surpassing 3 million, the United Nations said. Almost half of all Syrians have been forced out of their homes. Afghan children gather at a special medical camp set up by UNHCR to mark World Refugee Day in Islamabad on Friday. The U.N. agency says there were 51.2 million displaced people at the end of 2013, 6 million more than the previous year. Farooq Naeem/AFP/Getty Images hide caption

June 20, 2014 • At least 51.2 million people are now living under forced displacement, a U.N. agency says. If all of them were put into one country, it would be the 26th largest in the world. 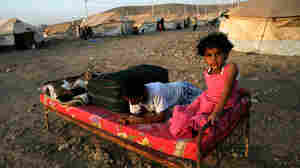 Syrian-Kurdish children sit on a bed at the Quru Gusik refugee camp in the Kurdish region of northern Iraq, on Aug. 22. Faced with brutal violence and soaring prices, thousands of Syrian Kurds have poured into Iraq's autonomous Kurdish region. UNICEF has reported that over one million Syrian children live as refugees in other countries. Safin Hamed/AFP/Getty Images hide caption

August 23, 2013 • Syrian children account for 1 million of the 1.75 million Syrians who have fled their country since the beginning of the upheaval in 2011, the United Nations says. 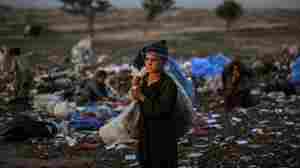 Afghan refugee children collect items of use from a pile of garbage on the outskirts of Islamabad, Pakistan. Muhammed Muheisen/AP hide caption

June 19, 2013 • The United Nations says more than 45 million people worldwide are refugees — the most since 1994 — and that nearly half are children. Fleeing Syrians are a growing concern.