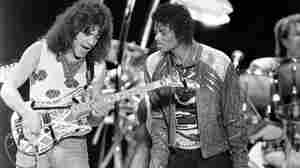 Guitarist Eddie Van Halen came on stage during a Texas stop of Michael Jackson's 1984 tour to play on "Beat It," the Jackson hit that featured a solo by Van Halen. Now, questions about a guitar that the two supposedly signed have led to the cancellation of an auction of Jesse Jackson Jr.'s goods. Carlos Osorio /AP hide caption

September 20, 2013 • Former Rep. Jesse Jackson Jr. will soon head to jail for misusing campaign funds. The U.S. Marshals Service wants to auction off some of the things he bought with that money. But there are questions about the authenticity of a guitar supposedly signed by Michael Jackson and Eddie Van Halen.