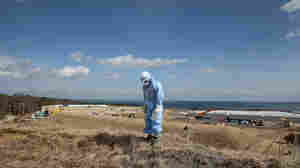 An employee of Tokyo Electric Power Co. works at Japan's Fukushima Dai-ichi nuclear power plant to decontaminate the area after the 2011 nuclear meltdown. A Vietnamese laborer in Japan on a training program says he was also put to work cleaning up the site, but with inadequate gear. Christopher Furlong/Getty Images hide caption

January 15, 2019 • A Vietnamese laborer tells NPR he was led to believe he would learn construction work but ended up cleaning up the Fukushima nuclear site. Migrant advocates say Japan needs to overhaul the program. 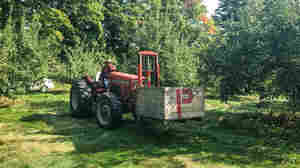 As in the rest of the country, growers in heavily agricultural northern Michigan rely overwhelmingly on migrant laborers to work the fields and orchards. Most of the pickers are from Mexico. Growers say it's just about impossible to find Americans to do this work. Melissa Block/NPR hide caption

September 27, 2017 • Some growers say that President Trump's anti-immigrant rhetoric has made a chronic worker shortage even worse. 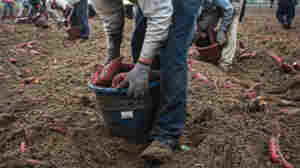 Workers sort potatoes in the field, collecting small and large ones in different buckets. Each bucket weighs 30 pounds or so. A worker will shoulder that bucket and dump it into a flatbed truck 400 to 500 times a day. It's a daily load of 6 or 7 tons of sweet potatoes. Dan Charles/NPR hide caption

November 24, 2015 • More than half of America's sweet potatoes were lifted by hand from the soil of North Carolina. It's some of the most back-breaking farm work to be found, and migrant laborers do most of it.