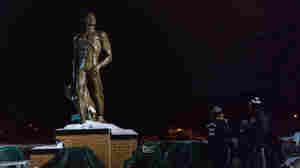 Legend has it that some University of Michigan fans defaced the statue sometime in the 1960s, and that led to members of the Michigan State University band and other students, sitting vigil. Alec Gerstenberger/WKAR hide caption

At Michigan State, Students Protect Their Mascot From Mischievous Rivals

November 14, 2019 • Michigan State University band members are standing guard over Sparty, the mascot statue, ahead of the big game against the University of Michigan to prevent it from being dressed in rival colors.

At Michigan State, Students Protect Their Mascot From Mischievous Rivals 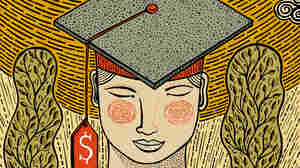 "Being Not Rich at UM" is an over 80-page online guide to navigating college for low and middle-income students. Cargo/Getty Images/Imagezoo hide caption

April 26, 2018 • At the University of Michigan, two students have created an online guidebook with tips for other low- and middle-income students trying to manage the high costs of college. 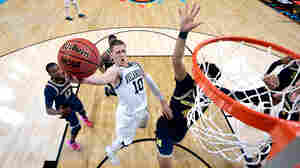 Donte DiVincenzo of the Villanova Wildcats drives to the basket Monday night against Isaiah Livers of the Michigan Wolverines in the first half during the 2018 NCAA Men's Final Four National Championship game at the Alamodome in San Antonio. DiVincenzo came off the bench to score 18 points in the half and 31 in the game. Pool/Getty Images hide caption

April 2, 2018 • Sophomore Donte DiVincenzo scored 31 points as the Wildcats, sporting the nation's most powerful offense, overcame a slow start to blow past the Wolverines, 79-62.

More from university of michigan
Browse archive or search npr.org