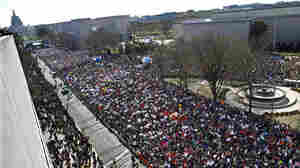 In this March 2018 photo, protesters fill Pennsylvania Avenue during the March for Our Lives rally in support of gun control. The student-led demonstration was one of the motivations for a new Fairfax Schools policy giving students one day off per year for protests. Jose Luis Magana/AP hide caption

December 27, 2019 • The policy, which educators say is a first in the nation, is meant to give students an outlet for political activism. 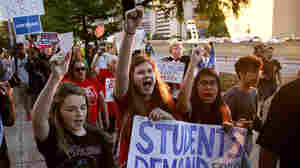 Young protesters chanted on Friday as they marched from City Hall to the Kay Bailey Hutchison Convention Center where the National Rifle Association is hosting an annual, four-day convention. Sue Ogrocki/AP hide caption

May 5, 2018 • The National Rifle Association's four-day convention in Dallas has drawn supporters and opposition alike. 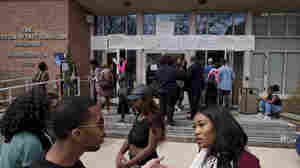 People gather outside the Mordecai Wyatt Johnson Building in Washington D.C., during a sit-in at Howard University last week. By Thursday the students were entering their second week of protest and say they won't move until they are satisfied. The Washington Post/The Washington Post/Getty Images hide caption

April 5, 2018 • It has become the longest protest ever at the historically black university and still the school's president has ignored calls to resign following a financial aid scandal.