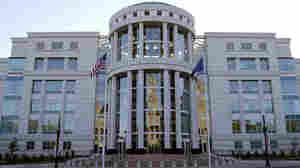 A Utah woman is facing misdemeanor lewdness charges after being seen topless in her own home by her stepchildren. Her attorneys argued Tuesday in district court in Salt Lake City that the statute is unconstitutional. Francis Dean/Corbis via Getty Images hide caption

November 21, 2019 • The case is the latest legal battle amid a broader "free the nipple" campaign that seeks to normalize the exposure of female nipples.

More from free the nipple
Browse archive or search npr.org