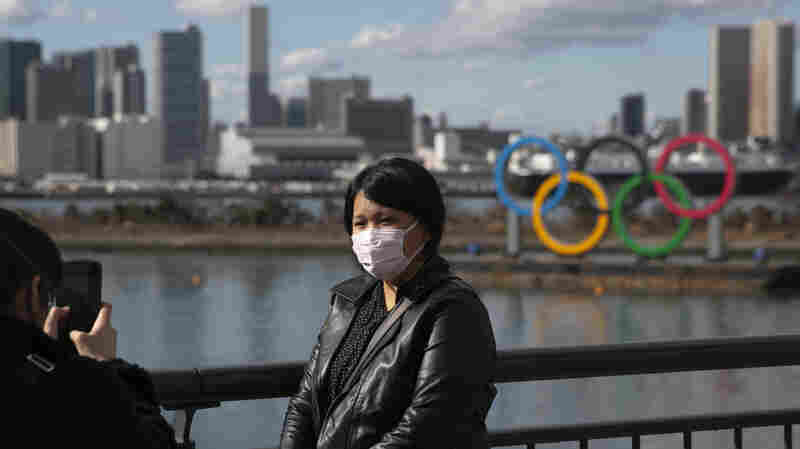 February 27, 2020 • The statement comes in response to remarks made earlier this week by a longtime International Olympic Committee member who suggested a late May deadline to decide the fate of the Tokyo Games. 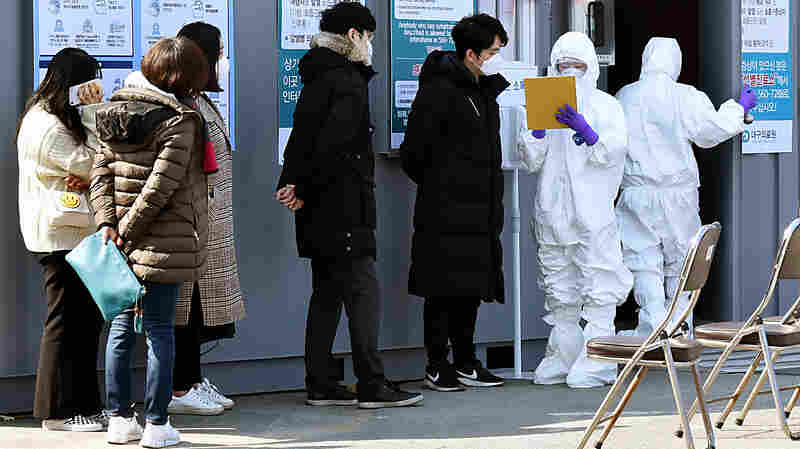 People suspected of being infected with the new coronavirus wait for diagnostic tests at a medical center in Daegu, South Korea. Lee Moo-ryul/AP hide caption 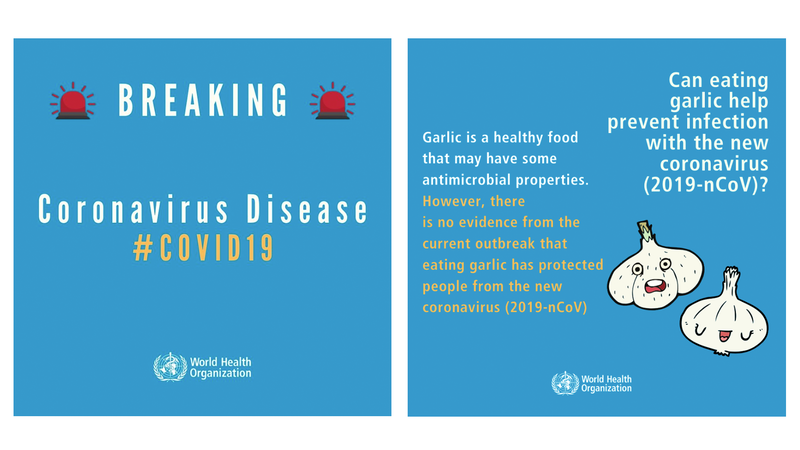 February 21, 2020 • Rumors and untruths are spreading online — from conspiracy theories about the origin of the virus to outlandish treatments. 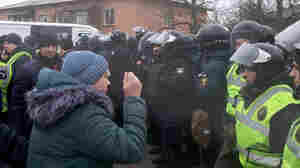 Local residents protest the plans to quarantine evacuees from coronavirus-hit China at a local hospital, in the settlement of Novi Sanzhary, Ukraine, on Thursday. Maksym Mykhailyk/AFP via Getty Images hide caption

February 21, 2020 • More than 200 new infections have been identified in a prison in eastern Shandong province. Meanwhile, in South Korea, dozens from the same religious sect have contracted the virus. 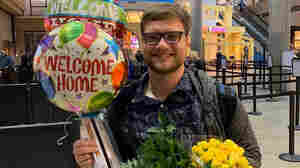 Daniel Wethli got a warm welcome from his mom and dad at the Pittsburgh airport last week after clearing two weeks of quarantine in Southern California. He was studying in Wuhan when the novel coronavirus shut the city down, but never showed any signs of infection. Daniel Wethli hide caption

February 20, 2020 • As evacuees who cleared a 14-day quarantine return home to their communities, a U.S. man talks of his experience in China and the transition home. 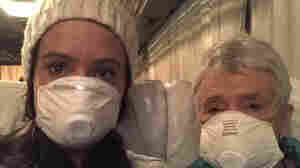 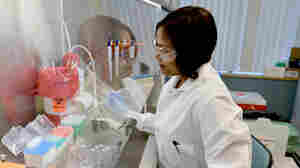 February 19, 2020 • The new coronavirus has spurred biotech labs in universities and companies to try to find new approaches to stopping the virus — from blocking its key enzymes to interfering with its genetics. 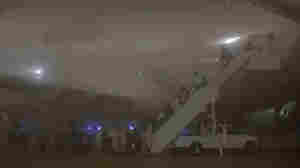 February 17, 2020 • U.S. officials said the people infected with the virus were isolated from the other passengers. The two evacuation flights landed at military bases in California and Texas. 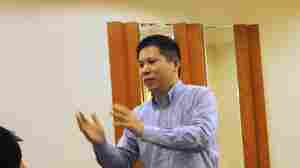 Prominent Chinese rights advocate Xu Zhiyong speaks during a meeting in Beijing in a handout photo from 2013. Xu has been detained in southern China. Xiao Guozhen via Reuters hide caption

February 17, 2020 • Friends of Xu tell NPR that the prominent legal and civil rights activist was arrested on Feb. 15 in southern China. Xu had managed to evade authorities tracking him for nearly two months. 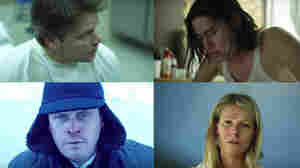 Fact-Checking 'Contagion' — In Wake Of Coronavirus, The 2011 Movie Is Trending

February 16, 2020 • We asked epidemiologists and doctors to assess the science in the 2011 movie, in which the character played by Gwyneth Paltrow starts a global pandemic. Spoiler alert: It does a pretty good job. 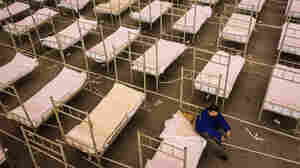 On Feb. 4, beds were installed in the Wuhan Keting Exhibition Center. With 2,000 beds planned, the center will accommodate patients with mild cases of COVID-19. Stringer for NPR hide caption

PHOTOS: Scenes From The Epicenter Of The Coronavirus Outbreak

February 15, 2020 • A photojournalist in Wuhan, China, portrays a city under quarantine in the midst of COVID-19. 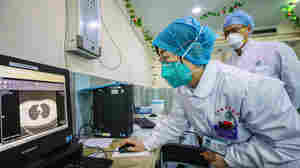 A doctor wearing a face mask looks at a CT image of a lung of a patient at a hospital in Wuhan, China. AFP via Getty Images hide caption

February 14, 2020 • Most cases of the illness are characterized as mild, with symptoms similar to those of a common cold or the flu. But there have been over 1,300 deaths. 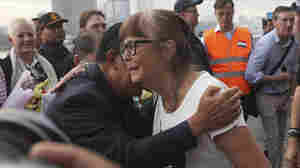 A passenger (right) is hugged by Cambodia Prime Minister Hun Sen after she disembarked from the MS Westerdam at the port of Sihanoukville, Cambodia, on Friday. Heng Sinith/AP hide caption

February 14, 2020 • The MS Westerdam, with nearly 1,500 passengers aboard, was rebuffed by Japan, Taiwan, Thailand, the Philippines and Guam before ultimately being allowed to dock at the Cambodian port of Sihanoukville. 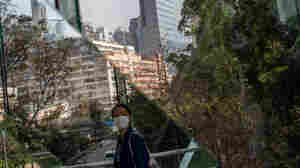 A person walks through a shopping plaza in the Mong Kok neighborhood of Hong Kong. Fears of catching the virus have meant fewer people in public spaces. Meredith Rizzo/NPR hide caption

February 13, 2020 • Students, business owners, sanitation workers and doctors are all struggling to cope with the daily frustrations of living in a city of 7 million that's afraid of an outbreak of COVID-19. 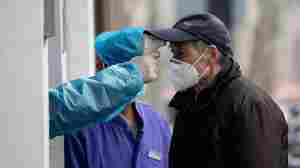 February 13, 2020 • Hubei province has added "clinical cases" to the count — patients who exhibit all the symptoms of COVID-19, the disease caused by the coronavirus, but have either not been tested or tested negative. 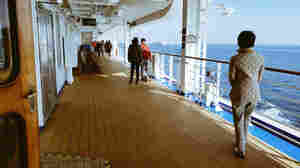 Many passengers aboard the Diamond Princess cruise ship have created online groups to share news and encourage each other. And in some cases, they've formed lasting friendships. @daxa_tw/via Twitter hide caption

February 12, 2020 • The postings on Facebook, email and WhatsApp are mainly "just words of encouragement and a friendly ear." But they also share food reviews and news. 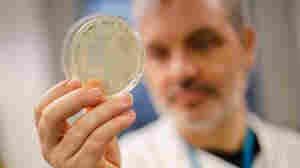 Paul McKay, a molecular immunologist at the Imperial College School of Medicine in London, checks a dish of bacteria containing genetic material from the new coronavirus. He and his team are testing a candidate vaccine. Tolga Akmen/AFP via Getty Images hide caption

February 12, 2020 • Recent advances in biotech make scientists optimistic that they might have a vaccine that has passed basic tests of human safety and efficacy ready to go to clinics as soon as this fall. 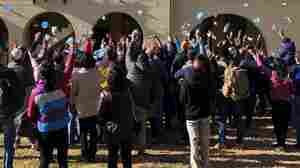 February 11, 2020 • Emerging from the CDC's first quarantine in more than 50 years, one of the evacuees tells NPR that while people are excited, "we're kind of sad saying our goodbyes to each other." 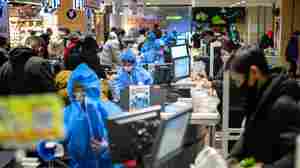 February 11, 2020 • Two senior health officials in the province were fired, leaving Beijing in charge of efforts there to contain the virus which has killed more than 1,000 people since late December. 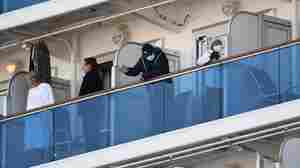 February 10, 2020 • The new cases include 45 Japanese and 11 Americans, as well as smaller numbers of people from Australia, Canada, England, the Philippines and Ukraine. 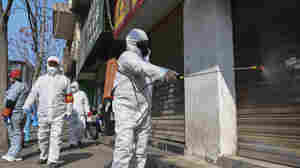 February 10, 2020 • The Tuesday figures come as the head of the World Health Organization warns that a few cases of 2019-nCoV that have been spread by people who never traveled to China could be "the tip of the iceberg."

February 9, 2020 • Dozens of passengers on a cruise ship have tested positive for coronavirus. NPR's Lulu Garcia-Navarro talks with Gay and Philip Courter, among the 3,700 quarantined on a ship in Yokohama, Japan. 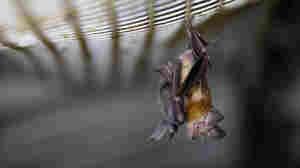 A horseshoe bat. Bats are known to carry many different strains of viruses but do not get sick from them. Menahem Kahana/AFP via Getty Images hide caption

February 9, 2020 • The winged mammal has a unique ability to carry viruses and not get sick from them. This tolerance may be a unique adaptation to flying. A Chinese woman wears a protective suit and mask as she waits to cross the intersection of a nearly empty Beijing on Saturday. Kevin Frayer/Getty Images hide caption

February 8, 2020 • As the number of fatalities in mainland China rises above 800, Beijing has granted approval to a team of international health experts to travel to China to investigate the virus. 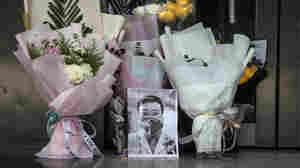 Flowers and a portrait of Dr. Li Wenliang is left at his hospital in Wuhan, China. Li, regarded a whistleblower in the coronavirus outbreak, died of the infectious disease on Friday. Getty Images hide caption

February 8, 2020 • They charge that news of a new pneumonialike illlness was kept from the public for weeks — and that social media accounts are being shut down if certain types of comments are made.