Accessibility links
Mary Halvorson: Unorthodox, Jagged Jazz Guitar She says she never encountered any other female jazz guitarists growing up. But then again, Mary Halvorson is no run-of-the-mill jazz guitarist. She demonstrates her unique, hard-edged attack with her trio on WNYC's Soundcheck. 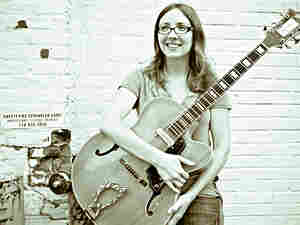 Mary Halvorson released her debut as a leader in fall 2008, but has appeared on a variety of avant-jazz, chamber music and experimental rock recordings. Peter Gannushkin hide caption

As James Brown once said, "It's a man's, man's, man's world." It's especially true in the world of jazz guitar.

Mary Halvorson says she never encountered any other female jazz guitarists growing up. But when it comes to her hard, assertive sound, she can drown out plenty of other plectrists, regardless of gender.

"Some of the tunes do have a little more of a traditional jazz sound," Halvorson says. "And some of them... get away from it. But I liked being able to capture different types of energies with a traditional instrumentation."

Halvorson's music, at least with John Hebert on upright bass and Ches Smith on drums, sounds little like standard mainstream jazz. Then again, Halvorson didn't start out as a mainstream jazz guitarist: Her first instrument was the violin.

"And then I discovered Jimi Hendrix," she says. "So I actually bought a black-and-white Stratocaster. And that was my first love on the guitar."

Halvorson's first guitar teacher happened to be a jazz player, so she says she fell into improvising. But even then, her first jazz heroes weren't guitarists.

"Actually, a lot of my influences were horn players," Halvorson says. "I really liked Eric Dolphy, John Coltrane and Miles Davis -- people like that. My dad had a lot of those records. So when I started playing jazz primarily, it wasn't jazz guitar that I was listening to."

Halvorson is known for her distinct sound on the instrument, some of which derives from her sharp strumming technique. She says it comes in part from her love for the upright bass.

"I really like the attack of the upright bass," she says. "And it was just instinct. Like, even when I was 11, 12, I remember thinking, 'I want to pick really hard' -- I don't know why. Partly to get the sound of an upright bass, and I like having that sort of edge and attack.

"I think jazz guitar isn't very ladylike in general," Halvorson says. "Not that it shouldn't be."

Halvorson, who is not yet 30, says she already sees more female jazz instrumentalists today than when she was first learning jazz. Srowing up, she says she saw plenty of women playing guitar in folk and rock groups, but little in the way of jazz guitar.

"Because there's no women doing it, there are no role models for women starting out. So it sort of perpetuates itself. ... I didn't really mind. I've always had a lot of male friends, and it didn't really bother me being in an environment where I was the only woman, but I think that can be discouraging."

Each of the 12 songs on Dragon's Head comes with a number, which indicates the order in which each piece was composed. (The songs are not arranged in chronological order on the CD.)

"In my mind, this is a long-term project -- I don't plan to just make one record and stop," Halvorson says. "And I wanted to document my compositional evolution in the band, because I'm not really sure what direction it's going in. So I thought it would be interesting, you know, if there's a third album, fourth album, to have the numbers there so one could actually see an evolution of some sort, whatever direction."

She says that by the end of writing a full-length album's worth of material for her trio -- in other words, by songs 9-12 -- she was beginning to hone the varied experiments of her first eight songs into more of a cohesive concept.

"Also, I've been thinking more about jazz, actually, recently," Halvorson says. "So I think the later ones are a little bit jazzier."