Accessibility links
A Lullaby for Grownups in Love It's difficult to write a song that evokes the slowed-time pull of sleepiness without lulling listeners toward unconsciousness themselves. Eleni Mandell pulls it off in "Moonglow, Lamp Low," which draws on a gentle cowboy lope and a saxophone that sounds like captured breath.

A Lullaby for Grownups in Love

A Lullaby for Grownups in Love 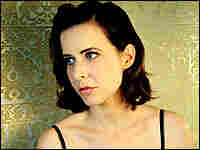 It's a difficult task to write a song that successfully evokes the slowed-time pull of sleepiness without going too far and lulling listeners toward unconsciousness themselves. Eleni Mandell pulls it off in "Moonglow, Lamp Low," the opening track to her new album, Miracle of Five. Using a gentle cowboy lope and a saxophone that sounds more like captured breath than anything specifically musical, the singer crafts a lullaby for the whole world.

Mandell avoids another trap by creating a bedtime vibe, rather than a late-night one. This isn't about being up until the wee hours of the morning; Mandell could be describing a scene that takes place at 9 p.m. The effect is like an old cartoon where the entire town is drifting into slumber, not just the people in it. "The sky says goodbye with the wink of an eye," she sings in a somniferous coo, adding, "a bright blue yawning to the west." The language she employs captures what could be kiddie imagery in terms that are far more adult. In the end, "Moonglow, Lamp Low" sounds like Goodnight Moon for grownups in love.