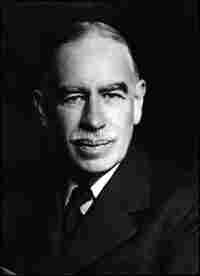 Test Your Own Economic Theories

John Maynard Keynes is an unlikely hero for our time.

Keynes, a British economist who died more than 60 years ago, inspired President Barack Obama's plan to save the U.S. economy with a massive round of government spending. The British economist published his big theory, the one underpinning most of what Obama intends to do, in 1936.

By the 1980s, many believed Keynes' ideas were utterly discredited. But he is the man who came up with the then-radical notion that a government can pull a country out of a deep recession by spending a lot.

Many would argue that Keynes' 73-year-old theory is being tested, right now, for the very first time. One Keynes biographer, Lord Robert Skidelsky, portrays Keynes as a fascinating figure, equal parts genius and jerk. Keynes ran with the Bloomsbury Group, which included painters and writers such as Virginia Woolf. The Bloomsbury crowd was known for free love and raunchy language, but even they complained in letters to each other that Keynes was too dirty for them.

Keynes could be just as shocking when it came to academic theory, sounding like a socialist one moment and fanatically defending free markets the next.

The one constant was Keynes' faith in the elite. He generally believed that almost any problem could be solved by getting together young men who had been schooled at Cambridge and asking them to take over. He even wanted Cambridge men to run America, because he didn't think anyone in the U.S. was smart enough. He also didn't like Jews, the French or the working class.

Keynes wrote that these Cambridge-led government boards should do everything from running individual companies to determining how many babies should be born and, cryptically, of what quality. Keynes was, after all, on the board of directors of the British Eugenics Society.

Fast-forward to modern-day America, when the livelihoods of millions of working people are in peril. Who does the national leadership turn to but a bigoted Americaphobe who hates working-class people.

Keynes became this season's go-to solution because of his masterpiece prescription for how to get out of a global depression — The General Theory of Employment, Interest and Money.

"I've read the general theory five times," says Tyler Cowen, an economist at George Mason University. "The first time I read it, I was maybe 18." Cowen has been reading Keynes' book again, this time writing notes and conducting a discussion on his blog, Marginal Revolution.

Cowen says Keynes corrected what he saw as a fundamental error in the economics that had come before. Classical economics teaches that if there's a downturn, the economy will eventually sort itself out. If people aren't buying enough, prices will drop to a point where people start spending.

Keynes' radical insight was to look out the window in the 1930s and see that sometimes things don't right themselves. The economy goes into a downward spiral. The usual dynamic of supply and demand breaks down.

"A failure of effective demand is what he called it," says Alan Blinder, a Princeton economist who served as economic adviser to President Bill Clinton. Basically, people aren't spending enough money, either because they don't have any or because they got laid off or are afraid they're about to get laid off.

If people aren't spending enough money, there's no way for the economy to automatically adjust. During the Great Depression, no one had figured out how to get people spending again. Then came Keynes.

"The Keynesian prescription is if all else fails, the government can spend the money," Blinder says. Normally, in a free-market economy, the public doesn't look to the government to prop up spending. "But Keynes' idea, which was revolutionary at the time, is if the private sector won't do it, then the public sector can do it as a fill-in stopgap," Blinder adds.

Did Keynes Cure The Great Depression?

Like lots of fellow Keynesians, Blinder says Keynes' theory played out in the 1930s, with government spending pulling America out of the Depression. That's become the standard line in school textbooks. But Keynesians say it wasn't so simple as President Franklin Delano Roosevelt getting inspired by Keynes and spending his way out of the crisis.

Yes, Roosevelt expanded government spending, with an alphabet soup of programs. But he never spent as much money as Keynes said he should have. He also did all sorts of things that Keynes opposed, like raising taxes and trying to balance the budget. Keynes said those steps would cancel out any positive effect from spending. Roosevelt bothered Keynes so much that the economist sent him at least one scolding letter.

Then, finally, geopolitical events took over, and World War II forced Roosevelt to spend as much money as Keynes wanted.

Keynes died in 1946, right after the war, and economists have been fighting about his ideas ever since. One main question is whether Keynes actually got America out of the Depression.

His disciples came to believe that his theories could be used much more precisely — that Keynesian principles could help control the economy more closely than Keynes ever believed possible. Blinder cites a triumphant sense among Keynesians that by carefully tweaking taxes and spending, they could overcome booms and busts — that they could permanently eliminate recessions.

"There was a view that developed in the 1960s, and developed excessively one must admit in retrospect, that we could steer the national economy pretty well — not perfectly, but pretty well," Blinder says. He calls the confident optimism among Keynesians of the time almost laughable. "This was a watch that we were repairing."

One way the economy is not like a watch is that you can repair a watch without politicians. Politicians took the Keynesian message that government spending can be good and ran with it. They paid for the war on poverty and the war in Vietnam. They sent a man to the moon. All the while, they piled up the federal budget deficit, convinced that Keynes gave them a free pass.

Prescribing Keynesianism to some politicians is like prescribing crack to a coke addict. In the 1970s, the patient hit rock bottom. The U.S. had high unemployment, and the Keynesian solution stopped working. The national government spent and spent, but unemployment only got worse. Then came inflation, something Keynesians had no answer for.

The Return Of Keynes

After the economic misery of the 1970s, it was the Keynesians' turn to walk in the wilderness.

"When I took macroeconomics in the 1980s and early 1990s, the textbooks explained the basic system, but then spent a few chapters showing why the Keynesian system did not work," remembers economist Chris Edwards, now of the avowedly anti-Keynesian Cato Institute. The think tank was founded in 1977, near Keynesianism's lowest point. Edwards says he thought the debate of Keynesianism was settled in the 1980s.

Now, with the new stimulus package before Congress, the Keynesians are back — and economists across the spectrum are calling for government spending. Where are the theorists who oppose it? "I thought this sort of kindergarten Keynesianism, as I call it, the simple idea that the government can spend more money to grow the economy, had died in the 1970s," he says. "But I was wrong."

Edwards is part of a school of thought that replaced Keynesianism. The discipline of economics includes many different groups — the monetarists, the Chicago school and supply-side economics. The Keynesians used taxes and government deficits as their main tools for steering the economy. The anti-Keynesians thought you could have the same effect just by using the central bank — the Federal Reserve — to carefully control interest rates. If the economy overheats, raise rates. If it starts to sputter, lower them.

The Keynesians and anti-Keynesians fought some bitter battles through the 1980s. But by the time of the Clinton administration, most economists agreed on the basics: Some of Keynes' ideas are useful, but in a post-Keynesian world, the interest rate is the most effective tool.

This view held sway until a month ago — Dec. 16, 2008, to be precise. That's the day the Federal Reserve tried to stabilize the economy by lowering the interest rate all the way down to zero percent. The Fed can't go lower, but the economy has kept worsening. The one effective tool seemed to have stopped working.

Economists and policymakers started looking around for some other way to fix things. They dusted off some old books and found that there's one guy in particular who'd given a lot of thought to get out of a situation like this.

"So, here's the way Keynes would have done it," Blinder says, sketching points on a blackboard in his office.

The Keynesian formula is straightforward. First, you estimate how much the economy should be producing — given all the people and factories and offices. Blinder's guess is $15 trillion. Then you look at what the economy is actually producing. He puts that at $14 trillion.

The government shouldn't have to spend the entire trillion-dollar shortfall. That's because of something called the "Keynesian multiplier." Every dollar the government spends produces more than a dollar in spending throughout the economy. If the government pays you to build a bridge, you spend your paycheck on rent and food and so on, and then your landlord and grocer have money. Using Keynesian math, you can figure out exactly how much the Obama administration should spend.

Blinder taps his chalk, winding up his calculations. "That would lead you to conclude that you needed about $650 billion as a stimulus," Blinder says. "Voila! That's the kind of number they're talking about right now. You see it in the newspapers every day, a number in that range."

Right now, a lot of economists are supporting the idea of a stimulus package. There are people you'd expect, like Paul Krugman, a proud Keynesian at The New York Times. There are also some surprises, like President Ronald Reagan's chief economic adviser, Martin Feldstein.

Many of the economists say they just don't know whether the Keynesian approach will work. Financial catastrophes don't happen often enough to prove theories like his. In fact, as economists like Blinder will tell you, this is the problem with economics.

"The biggest problem with learning things in economics is the inability to do controlled experiments," Blinder says. "So we don't have, unlike what is the case in many sciences, the definitive experiment. This experiment they did in the 1920s proved that Einstein was right about the perturbation of Mercury. It proved. We can never do that in economics. The best you can have is a really good theory. It's not going to work perfectly in a textbook manner all the time."

Anti-Keynesians say this massive stimulus package is too risky an experiment on an unproven theory. It might not get America out of the recession, they say. It might cause vicious inflation and a bloated government, and leave a trillion more dollars in debt as a constraining burden on Americans' children and grandchildren.

This report was produced in collaboration with Chicago Public Radio's This American Life.