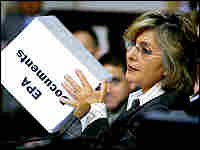 This week, President Obama told the EPA to reconsider a policy that says states can't set their own tailpipe emissions standards.

California, and more than a dozen other states, were barred from setting stricter emission standards under the Bush Administration.

Democratic Senator Barbara Boxer of California is leading the push on Capitol Hill to get the EPA to allow that state to enforce its own emissions standards, and she joins Tony Cox to discuss the measure.