Accessibility links
Serotonin Boost Turns Locusts Into Social Swarms New research shows that the common brain chemical serotonin triggers gregarious, swarming behavior in locusts. The study, published in Science, says that when the normally solitary insects come together, the sight, smell and touch of other locusts causes a spike in serotonin levels, turning them into social creatures. 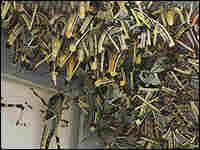 After just a few hours of forced crowding, these locusts experienced a steep rise in the brain chemical serotonin, making the formerly solitary insects attracted to other insects. Tom Fayle/Science hide caption 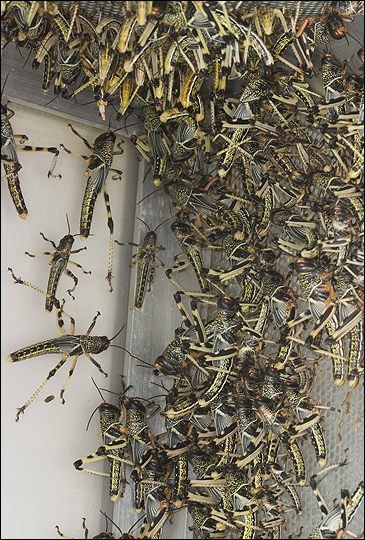 After just a few hours of forced crowding, these locusts experienced a steep rise in the brain chemical serotonin, making the formerly solitary insects attracted to other insects.

A common brain chemical that affects mood in people has been linked in new research to the devastating swarming behavior of locusts, the insect that has plagued farmers since biblical times.

Elevated levels of serotonin, the same chemical targeted by some anti-depressant medications, appear to have a transformative effect on the insects' social behavior, according to a report published this week in Science.

Desert locusts are a kind of grasshopper; they migrate in great swarms that can contain billions of insects and stretch for miles. These swarms eat everything in sight — and have recently devoured crops in places like Africa, China and Australia.

But even though these massive swarms are the reason locusts are so notorious, "the swarming is something that locusts only do very occasionally," says Steve Rogers, a researcher at the University of Cambridge in England.

"In fact, locusts can spend many generations in a form that not only doesn't swarm but is actively repelled by other locusts," he says.

These mild-mannered, solitary grasshoppers can change, however, if something like a drought forces them to crowd together at a dwindling food source, if they start to smell and see other locusts and touch them.

"This is exactly the point at which behavior changes dramatically," Rogers says.

The locusts go through a kind of "Dr. Jekyll and Mr. Hyde" transformation. They become gregarious, start flying around and seek out others so they can migrate as a group.

This change in behavior occurs quickly, after just a few hours of forced crowding, says Rogers.

He and his colleagues wanted to know what actually happens inside the insect during this transformation. They learned that inside the insect's nervous system, there is a steep rise in a brain chemical called serotonin. The more serotonin an insect has, the more gregarious it is.

Testing Serotonin In The Lab

To find out if serotonin was actually responsible for the insects' change in behavior, the researchers decided to manipulate serotonin levels by giving the locusts certain drugs.

"It was absolutely startling to see the effect that these drugs had," says Michael Anstey, a researcher at the University of Oxford.

"This really was the 'Eureka!' moment," says Anstey.

It's not clear yet whether this research could someday be used to develop new methods of pest control. But Rogers says it is surprising to see just a single chemical having such a huge effect.

"Using models like bees and wasps, we know that as they change behavior, as they leave the nest and things, there's a whole stew of different chemical changes going on," he says. "So, I think what we've found is genuinely quite unusual."

Still, serotonin is known to affect mood and behavior in other species, including people.

"Serotonin is implicated in a lot of aspects of mood and well-being in humans, as well as causing this change in locusts," says Rogers. He notes that some antidepressant drugs, like Prozac, boost serotonin levels.