Accessibility links
Obama's Stimulus Bill Pushes Social Agenda, Too Plans for the stimulus package have provided an early window into the president's priorities — including those beyond the immediate goal of jump-starting the nation's flailing economy. They include expanded government health care, attention to "green" initiatives and money for education. 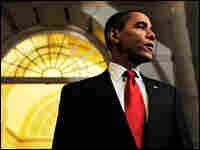 President Obama speaks to reporters at the Capitol after meeting with the House Republican caucus on Tuesday in Washington. Jonathan Ernst/Getty Images hide caption

President Obama speaks to reporters at the Capitol after meeting with the House Republican caucus on Tuesday in Washington.

Obama Puts Keynes
To The Test

John Maynard Keynes, a British economist who died more than 60 years ago, inspired President Obama's plan to save the U.S. economy with a massive round of government spending. The British economist published his big theory, the one underpinning most of what Obama intends to do, in 1936. Many would argue that Keynes' 73-year-old theory is being tested, right now, for the very first time. Find out more. 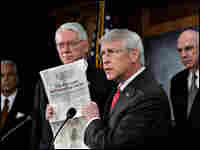 Sen. Roger Wicker of Mississippi joins other Senate Republicans in opposition to President Obama's financial stimulus package as he displays a newspaper advocacy ad at the Capitol on Jan. 29. hide caption 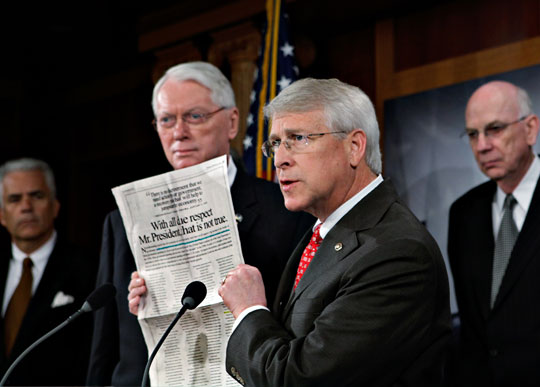 Sen. Roger Wicker of Mississippi joins other Senate Republicans in opposition to President Obama's financial stimulus package as he displays a newspaper advocacy ad at the Capitol on Jan. 29.

Though versions of President Obama's stimulus package are still working their way through Congress, the nearly trillion-dollar tax cuts and government spending blueprints have provided an early window into the president's priorities — including those beyond the immediate goal of jump-starting the nation's flailing economy.

"These are the principal building blocks of the domestic agenda he articulated," says William Galston, a senior fellow at the liberal Brookings Institution and former policy adviser to President Clinton. "In every respect, this goes in the direction of what he talked about."

"He's being very aggressive," adds Mark Zandi, chief economist of Moody's Economy.com and an adviser to Republican Sen. John McCain's presidential campaign last year. "He sees a huge void that only can be filled by the government."

A New Role For Government?

Conservative opponents detect a move toward universal health care — and a danger in the return to what they characterize as the failed economic policies of the 1930s. That's when the theories of economist John Maynard Keynes held sway: He argued that significantly distressed economies need big infusions of government money.

"A lot of us thought that old-fashioned Keynesian ideas had died," says Chris Edwards, director of tax policy studies at the libertarian Cato Institute, which has taken out full-page ads in major newspapers opposing the stimulus plan.

But prominent social scientist Craig Calhoun, a New York University professor and editor, most recently, of Sociology in America: A History, sees something quite different. Obama, he says, is using the stimulus bill to begin to reverse a "40-year drift away from the more or less idealistic hope that government would make things better."

"This is the beginning of the restoration of the idea that one of the roles of the government is to make lives better for the people," Calhoun says. "In a way, he's been given the gift of the stimulus package to bundle many projects into one package very early in his presidency."

Calhoun and others argue that the American people, reeling from record job losses and foreclosures, are ready to hear Obama's government-to-the-rescue arguments. And they're waiting to see what their home-state legislators will do. The House passed its $819 billion stimulus bill Wednesday night. The Senate is expected to vote on its own stimulus package next week, and then leaders of the chambers, both under Democratic control, will hammer out a compromise between the two versions.

Obama has said he wants a bill on his desk before mid-February.

Calhoun agrees that Obama's bottom-line proposals — and their eye-popping price tag — come as no surprise. And former Clinton adviser Galston says it was "entirely predictable" that Obama would craft a dual-purpose package — to balance short-term economic stimulus with an investment in the long term.

The only mild surprise: the magnitude of the proposed investment in education, including billions to increase Pell grants and prevent cutbacks in school services in strapped states, and billions more to build, modernize and repair facilities.

Obama is also proposing to extend Medicaid benefits to workers receiving unemployment checks, as well as their families; to have the government pick up, for one year, 65 percent of COBRA premiums paid by laid-off workers to extend their job-based insurance coverage; and to significantly increase unemployment benefits, job training and food stamp funding.

His Medicaid proposal, coupled with the children's health care coverage measure now working its way through Congress, "are steps toward the nationalization of health care," says J.D. Foster, a senior fellow at the conservative Heritage Foundation. "They're targeting demographic group after demographic group."

"And it was a clear goal of candidate Obama's health care plan," he added.

Conservatives like Foster and small-government advocates like Edwards of the Cato Institute are joined by some Democrats in their concern about the debt the nation will incur under the stimulus plan.

"Some critics might say that this is not a stimulus bill but a collection of campaign promises all bundled up," Edwards says. "I'm not in favor of the spending, whatever it's called."

Says Foster, of the Heritage Foundation: "The amount of debt issued will drive up interest rates, and that will choke off a recovery."

There are some things that are clear: Obama is not afraid of a big spending bill. He's pursuing campaign aims, but not in a grand or transformative way.

And he clearly believes that his enormous early popularity — his approval rating is close to 70 percent — will pave the way for spending he believes the country needs now, and a shift in priorities that may anger conservatives but could ease the burdens of the nation's poor and working class in the long run.

"There are things in the stimulus package that would have seemed controversial or left wing at other periods," Calhoun says. "But here they become part of a general response to the deep problems facing the country."

"I see his as a centrist policy that moves the center," he said.

What may be laid waste by the stimulus debate, however, is Obama's pledge to ease the partisanship that has poisoned Washington for so many years.

"During the campaign, he twinned a promise of more bipartisanship with a fairly Democratic — with a capital D — agenda," Galston said. "I've always been interested in how that tension would come out in the wash."

Obama faces big risks with his big plan: It has to stimulate the economy first, advance a social agenda second. But in their opposition to the stimulus package, Republicans face similar risks.

It all will, eventually, come out in the wash.