Accessibility links
Super Bowl Is World's 'Billion Dollar Game' The Super Bowl is the largest one-day sporting event in the world, and nearly a national holiday in the United States. Allen St. John, author of The Billion Dollar Game, writes it's also an "economic engine that's bigger than the GDP of many nations" and "the world's biggest party." 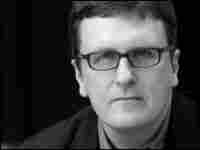 Live Chat:
Everything But The Game

Bob Garfield, Ad Age columnist and co-host of On the Media, joins Monkey See blogger Linda Holmes for some Monday Morning pop-culture quarterbacking. The ads, the show, the malfunctions — chime in as we take apart one of the year's biggest media weekends.

The Super Bowl is the largest one-day sporting event in the world, and nearly a national holiday in the United States. Allen St. John, author of The Billion Dollar Game, writes it's also an "economic engine that's bigger than the GDP of many nations" and "the world's biggest party."

St. John notes the following statistics about last year's game, sure to impress at your Super Bowl Sunday gathering:

The street value of a stadium full of Super Bowl tickets is $511 million.

Fox paid the NFL an estimated $66 million for the broadcast rights for the 2007-2008 season, including the rights to Super Bowl XLII.

Some have estimated that illegal betting on the game may have approached one billion dollars.

Tickets are a bit cheaper for the 2009 Super Bowl, but advertising spots are more expensive than in 2008, going for $3 million for a 30-second spot. 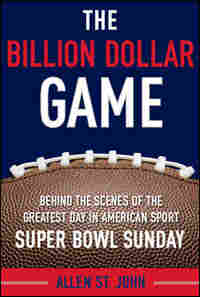 For a brief moment on Super Sunday inside the University of Phoenix Stadium, time stood still.

The game clock high above the field in the rafters near the retractable roof stopped with just one second on it. New England Patriots coach Bill Belichick either didn't notice or didn't care; he came out to congratulate Giants coach Tom Coughlin and then disappeared. Football's ultimate celebration had started. Sort of.

But like teachers caught in the middle of a cafeteria food fight, the referees had to stop it. Rules are rules — the game wasn't over. With that single second remaining on the clock, Eli Manning would have to take a knee once more. Then and only then would the greatest upset in Super Bowl history be complete. Better than anyone else, Giants fans understood the reason to play out that last tick of the clock. Thirty years ago, in one of the most preposterous moments in sports history, they lost a game when their quarterback fumbled the ball with just a tick on the clock. No, they'd play it out.

And yet this awkward moment was somehow perfect. It provided a rare moment of reflection. It was almost as if the game itself were trying to shake us and say, "Pay attention. You'll want to remember where you are right now so you can tell your grandchildren about it." For the less sentimental, it still provided an all-too-rare moment of unity. It was a perfect turn-of-the-millennium moment: 100 million Americans squinting at the television, scratching their heads, and saying "Huh?" in unison.

But the moment didn't last long. The referees restored order. The players got back on the field. The ball was snapped, and Celebration 2.0 began.

If this was the end of Super Bowl XLII, let's rewind almost a year to the minute to the beginning, or at least a beginning — to Miami and the end of Super Bowl XLI. The raindrops were glistening like a swarm of fireflies in the lights above Dolphin Stadium, but they'd also driven half of the fans in the most coveted seats in sports to take cover, leaving the hard core huddled under garbage bags. It was the same story where I was sitting, in the press section, the now-unattended TV monitors bleating to no one in particular and sodden press releases sitting in puddles on now-empty makeshift Formica desks.

It was a moment of dreams waxing and waning. Colts fans had been waiting for this for thirty-eight years, since Johnny Unitas was the quarterback and the team called Baltimore home. Peyton Manning and his dad and his brother had been waiting for this for two generations, a family of quarterbacks hoping to finally end a season with a win that meant something. Bears fans, still channeling Walter Payton and William "Refrigerator" Perry, were hoping against hope for a miracle, but for them, the clock was their enemy. Mine too, as I hustled down from the press box to field level for the postgame interviews.

As I shoved my iBook and my commemorative seat cushion into my black Targus backpack, I spied the sparkly silver band on the handle. It was one of those security tags. The band had been affixed by a smiling security guard earlier that afternoon after my laptop passed muster with a metal detector, an X-ray machine, and a bomb-sniffing dog, who lingered awhile, perhaps catching a whiff of the many hero sandwiches that have ridden shotgun next to my laptop. In one way, this tag was a symbol of the sometimes dangerous world in which we live. In another, it carried a message. Just above the NFL logo was the Super Bowl's official motto: "One Game, One Dream."

As mottos go, it's actually a pretty good one (better than "The Road to Forty," the motto of Super Bowl XL). But while it's catchy — so catchy that the 2008 Beijing Olympics adopted "One World, One Dream" as its catchphrase — it's also wrong.

The Super Bowl is anything but one game. It's the championship of America's Game. It's the world's biggest single-day sporting event. It's an unofficial national holiday. It's a billion-dollar economic engine that's bigger than the GDP of many nations. It's an opportunity for a couple of hours of unity in an increasingly fragmented world. It's America's most widely watched live television broadcast. It is an unrivaled marketing opportunity. It's the world's biggest party.

Most of all it's the vessel for an even greater multitude of dreams, from the winning cornerback to the college kid making a few extra bucks as the night watchman for a display of Super Bowl merchandise.

It's a story that starts with an innocent phone call to the enfant terrible of modern architecture and ends with that second hanging precariously on the scoreboard. It chronicles months and even years of intense preparation, moments of behind-the-scenes panic, and the strange web of connections that runs through an enterprise this enormous.

It's also a story that's never been told before.

And it's a story that's best told by picking a few of the key elements of this extravaganza, and exploring them in painstaking detail. Over the course of more than a year of reporting, thousands of miles of travel, and hundreds of hours of interviews and observation, I was granted unprecedented behind-the-scenes access, watching the game's movers and shakers at work, and then listening as they explained how and why a Super Bowl comes together. And in the process I learned this simple and profound truth: Most of the real heroes of a Super Bowl will never even touch a football.

During that time I came to understand what the Super Bowl is and what it is not. In polite disagreement with that security tag, I would argue instead that there are actually three Super Bowls: The Game, The Show, and The Celebration.

The Game is the first piece of the puzzle and the most obvious. Wikipedia might call it a game of American football, played eleven- on-eleven at a neutral venue between the champions of the American Football Conference and the National Football Conference for the championship of the National Football League. The cynical among us would suggest that it's an anticlimactic and often lopsided contest played in front of a crowd of scene makers sprinkled with ordinary fans who called in favors and/or dipped into the kids' college fund for the right to be there.

In sharing the story of The Game in its 2008 incarnation, we'll start with a visit with one of the world's greatest architects and the improbable story of the state-of-the-art stadium designed with the Super Bowl in mind. We'll meet the local officials who have bet everything on the chance of getting into the Super Bowl business. We'll meet the anonymous guy with a tiny, cluttered office on Park Avenue who on Super Bowl Sunday might be the most powerful man in sports.

Then there's The Show. That's the version of The Game that ends up on television, played not in front of 70,000 spectators but before 100 million or more. It's one of the strangest broadcasts in television, a day of reversals when network executives cheer for their competition and viewers wait with bated breath for the next commercial.

We'll go behind the scenes with the FOX Sports team, from the gregarious Australian who runs the ship to quarterback-turned-color-guy Troy Aikman to the guys in the truck who are faced with a preposterous real-time high-wire act yet make it seem almost easy. We'll also talk to the company that has turned Super Bowl advertising into an art form.

And finally, there's The Celebration. Over the span of four decades this game has morphed from a simple sporting event into an unofficial national holiday. Super Bowl Sunday has become an excuse for ordinary Americans to gather around the bean dip while A-list celebs party with unimaginable indulgence. We'll show you both sides of The Celebration. We'll get an exclusive insider's look at the hottest party of Super Bowl week, where a spot on the guest list can sell for more than a game ticket. At the other extreme, we'll also get down and dirty with a crew commemorating the Super Bowl by building a replica of the stadium out of canned goods.

And what powers it all? Cold hard cash. As we follow each of the story lines, we'll follow the money as well, Woodward and Bernstein style. So sit back in your Barcalounger with the beverage of your choice. It's time for The Billion Dollar Game to begin.