Accessibility links
Dueling Pig Ads Urge People To Save, Spend An American campaign tells people to brew their own coffee and bring their own lunches to work — so they can feed their piggy banks. Meanwhile, a campaign in Finland features a piggy bank with little devil ears — and a message not to feed the recession.

Have You Changed Your Saving Habits? 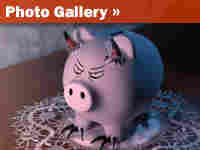 Finland is taking a novel approach to fighting the recession: a national ad campaign urges people, in this time of crisis, to spend money. Some of the posters feature a demonic-looking piggy bank and read, "Don't feed the recession."

Just think how contrary the ad's message is to everything your mom told you. For instance, there is another ad running right now in the United States, which also shows a piggy bank, but urges the exact opposite: "Feed the pig." In other words, saving is good.

The American campaign comes from FeedthePig.org, which has commercials for broadcast and the Web. In one, the narrator says, "When it comes to having money, don't rely on luck. Brew your own coffee at home, instead of buying that latte. Brown-bag it to work, instead of ordering in." The campaign is sponsored by the American Institute of Certified Public Accountants.

Finns, meanwhile, are hearing from their government that brewing your own coffee and bringing your lunch can be hell for the economy at a time like this. If you don't buy the coffee, the coffee place can't hire as many workers, the shop can't pay the rent on the store — and then the landlord is in trouble.

Economists call this dynamic the "paradox of thrift." It's a common idea, for them, but it doesn't usually turn up in ad campaigns.

The Finnish ads were put together by an advertising agency called Bob Helsinki. CEO Mika Sarimo says he had a piggy bank as a kid, complete with an image of Donald Duck's Uncle Scrooge McDuck on it. Today, he's marketing an image of a piggy bank with little devil ears. "Yeah, well, that's how it goes, you know," he says, with a laugh.

Sarimo says his agency launched the campaign because Finns were cutting back on spending. Even people who had steady jobs.

"We felt we were just drifting toward a more difficult situation," he says. "And there was an idea from one of our founding partners that was 'Why don't we create a campaign that's against the recession?'"

Government officials signed on, and now the evil piggy bank is on posters. Finns see pro-spending commercials on TV. It's a national campaign urging people not to overreact.

Could the campaign help the economy? Kent Smetters of the University of Pennsylvania's Wharton School of business says that it could — in theory. But it practice, urging peopel to spend works only if everyone does it. Barring some sort of incredible act of faith and patriotism, people will act in their own self-interest and save.

Finland could turn out to be a particular test case. It's home to only 5 million people, many of them well-educated. Smetters says he'd love to study a population like that. But for now, he's guessing that Finns won't be swayed. And in any case, Finland can't fix itself, by itself, in such a globalized economy.

The dueling pig ads pose a deeper economic question: What is the right level of savings? Smetters says that in his opinion, the friendly U.S. pig — the one that says "Feed me" — is right.

As a group, Finns don't save a lot, and neither do Americans. A couple years ago, the U.S. household savings rate was negative 2 percent. That means Americans spent 2 percent more than they earned. Over the last year, the U.S. savings rate hit a high of 2.5 percent. "That is still much lower than what it should be," Smetters says. "It really should be closer to 10 percent, on a gross income level."

The right rate of savings remains a matter of debate. Certainly some saving is essential for the economy. When you save money at a bank, those dollars can be loaned out to someone else, which is how the economy grows. And certainly, it's possible to save too much. But Smetters doesn't think that will be a problem in the U.S. anytime soon.