Accessibility links
Some Technology Leaves The Blind Behind For those who can't rely on vision or hearing to guide their navigation of consumer electronics devices, doing simple tasks can become a huge challenge. Meanwhile, the price of many of the devices created specifically for the blind or deaf is anything but accessible — and would give most consumers sticker shock.

Listen
Some Technology Leaves The Blind Behind

Stevie Wonder spoke with NPR at the 2009 Consumer Electronics Show about accessible technology.

On What It Means To Have Accessible Music

On How Technology Can Improve The Quality Of Life 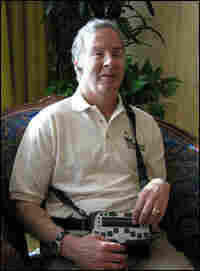 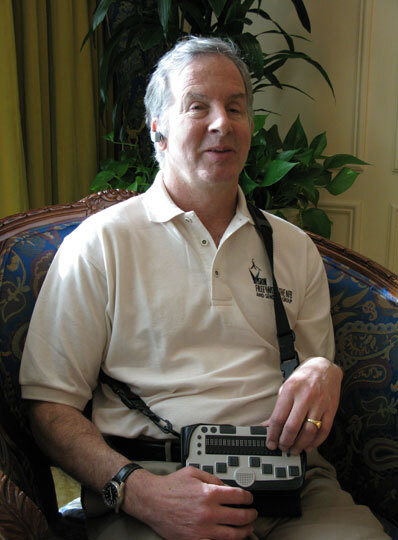 As consumer electronics companies race to create more flat screens, touch-screens and other sleek innovations to woo mainstream consumers, there's at least one group of people who are not celebrating this trend: the blind and visually impaired.

For those who can't rely on vision to guide their navigation of consumer electronics devices, doing simple tasks like changing a thermostat's settings, navigating a playlist on an MP3 player or using a GPS device may require the assistance of a sighted person.

"The real detriment today are flat screens, flat panels — flat everything," says Mike May, the president and chief executive of Sendero Group, a California-based company that makes accessible Global Positioning System products for blind and visually impaired people. "If you can't feel it, that's not a good thing in terms of buttons. If it's all touch control, that obviously doesn't work for a blind person. You feel around and you set things off, which is what would happen on a touch-screen."

Compounding the problem: DVD players and other consumer electronics typically now have onscreen menus in lieu of knobs. And these menus don't typically offer audible feedback or voice prompts.

"Hundreds of thousands of people on this planet are blind or with low vision," says recording superstar Stevie Wonder, who has been blind since infancy. He spoke with NPR at the International Consumer Electronics Show in Las Vegas earlier this month.

"So to me, that's enough to say, 'Let's do something about it.' And when you think about how by making things more accessible for those who are blind, how it would then make them more independent, then for the taxpayer that means less money. I think it's just time for the manufacturers and the companies that are making millions and millions of dollars to get on top of their game and do what they need to do to make it happen."

An accessible product is one that someone can use independently. Unfortunately, the price of many of the devices or software applications created specifically for the blind or deaf is anything but accessible and would give most general consumers sticker shock. A case in point is the KNFB Mobile Reader, software that enables a cell phone to read printed text aloud to a blind person through synthesized speech. It sells for close to $1,000 not including the cell phone.

Manufacturers, however, also face another challenge: What works for someone who is deaf — such as a touch-screen menu or a flashing light — may be completely unusable for a blind user. And the beeps or tones that are helpful for blind people do nothing for a person who is deaf or hard of hearing.

"There's not very many products in the mainstream arena or even in the accessibility arena that are perfect," May says. "There's always room for improvement. We're on something like our 10th version of our GPS for the blind, and it's far from perfect. But the important thing is we have a dialogue with the customers."

The menu screens on some gadgets can be especially frustrating. Wonder says it's important for accessible technology to avoid having menus that just go round and round and round. He suggests a musical solution: "If you're going to do that, then maybe put some tones on there and then make the tones be in a scale that once you get to the end of the various menus, it goes back to the lower tones, so that a person knows where they are in the scheme of that screen. And those things to me are very simple to do."

At a booth showcasing "vision free" products at the Las Vegas show, accessible technology experts gathered to demonstrate a handful of products developed with features that make them accessible for the blind. Wonder gave awards to some of these companies, including NPR, which was honored for helping to develop four accessible radios, including a captioned radio for deaf users, as well as a radio with Braille, among others.

Peter Cantisani, a blind technology engineer for RL & Associates Inc., a networking company that also sells products for the blind and visually impaired, gave this reporter a hands-on tour of the booth. Cantisani demonstrated some of the products — including a talking thermostat made by TalkingThermostats.com and a talking blood pressure monitor made by Life Source, and an HD Radio made by DICE Electronics with voice prompts and audible cues in addition to supporting a forthcoming radio reading service that will provide spoken text from some magazines and newspapers. Many of these products were designed using voice chips.

He also demonstrated how a mainstream product, like the Bose SoundDock for iPods, has features that make it accessible.

"It wasn't designed for the blind," Cantisani says. "It was just designed by Bose to be a good speaker." But he says the speaker's slightly recessed volume buttons provide good tactile feedback, and when the power cord is plugged in or taken out, it makes an audible sound.

But it may not be enough for companies to accidentally arrive at features that are user-friendly for the blind or deaf.

"I think the government has to get involved and say, 'Listen, if you want to get some of the tax breaks that you want, then you've got to make things accessible for those who are physically challenged,' " Wonder says. "You've got to give something to get something. I'm all the way with that. If you want to win, let's all win. Let's do this to make it happen for everyone."

Accessibility can be particularly problematic in the workplace. Employers often use technology that's incompatible with devices designed to be accessible to the blind and deaf.

"It isn't always that our technology doesn't keep up, but the developers of the software that is used in mainstream America do not develop their software so that it can be accessible with our technology," says Marlaina Lieberg, chair of the information access committee of the American Council of the Blind.

Lieberg says problems with technology in the workplace contribute to the nearly 70 percent unemployment rate among those who are blind. Deaf and hard of hearing people also say they have disproportionately high rates of joblessness. (Listen to what Stevie Wonder has to say about this.)

Anne Taylor, director of access technology for the National Federation of the Blind, says the NFB would like to see more mainstream product manufacturers and application developers seek feedback from communities whom they serve.

Taylor says the market potential isn't just about those who are presently blind or vision-impaired: "They're missing out on real market opportunity if they're not prepared to cater to people who may experience vision loss in the future."