Accessibility links
What's Accessible? Gadgets For The Blind And Deaf A new videophone provides real-time communication for the deaf, and electronic readers and GPS devices help blind users get around. They are part of an array of gadgets that enable people to navigate the world a little easier. 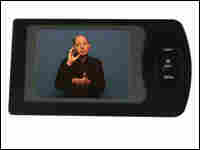 People who want to learn American Sign Language now have a palm-sized device that offers a video demonstration of each word. Courtesy of Krown Manufacturing hide caption 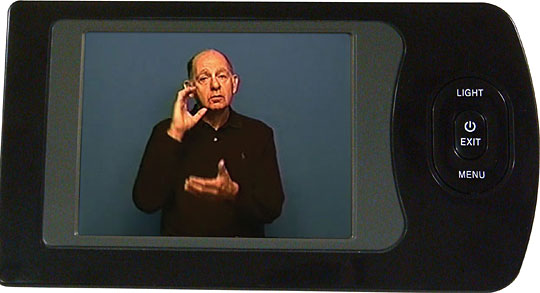 People who want to learn American Sign Language now have a palm-sized device that offers a video demonstration of each word.

A new videophone provides real-time communication for the deaf, and electronic readers and GPS devices help blind users get around. They are part of an array of gadgets that enable people to navigate the world a little easier.

Technology For The Deaf

Many deaf consumers use e-mail, text messaging and two-way pagers to communicate with someone who isn't in close proximity. But the disadvantage is that these modes of communication don't offer real-time communication.

Viable has a portable product called VPAD+, which is a video conferencing system. It's a type of videophone that works on Voice Over Internet Protocol (VoIP) and is about the size of a piece of paper (only thicker). It has a 10-inch touch-screen, Bluetooth and Wi-Fi so users can travel with it wherever they go. The product (which costs $699 for the general public or $99 if you're deaf or hard of hearing) comes with free access to the company's video relay service, which the government helps to subsidize. That means you're connected automatically to a live person who serves as an interpreter to translate voice into American Sign Language or vice versa at all hours of the day.

"The deaf rely on that [which is] communicated by facial expression and body expression," says Jason Yeh, Viable's vice president of technology. He says the company is also developing a single solution that will integrate real-time text, video and audio.

Another new development will benefit deaf and hard of hearing consumers: They're now able to obtain a 10-digit phone number that will connect callers directly with video relay services that use sign language or with Web-based connections that use English. That means they can simply give out a phone number to someone when they want to arrange real-time conversations, instead of having to give out a screen name or an IP address.

For those interested in learning American Sign Language, Krown Manufacturing has developed a hand-held sign language translator that will sell for $199. When a user types in one of 3,500 words, a video of a person pops up onscreen to demonstrate how to indicate that word in sign language.

Accessible Gadgets For The Blind

The National Federation of the Blind cites a number of features that help to make devices usable for the blind community. These include controls that have good tactile feedback; a "start over" control that is clearly documented; easy layout of rotary controls; using different sounds to signal errors, menus and selections; and having a predictable set of steps to access each item in a menu that has multiple layers.

Some consumer electronics developed specifically for the blind include GPS and electronic readers. Global Positioning System devices for the blind differ from other GPS consumer products by enabling everything to talk on the device, including all menus and selections. What's more, it describes the streetscape (e.g., "Walgreens, 215 feet on your left") and this information can be delivered by speech, Braille or a combination of both.

"It's narrating the environment to me in this look-around mode," says Mike May, the president and chief executive of Sendero Group, a California-based company that makes accessible GPS for the blind and visually impaired. "And that's not something a sighted person would want; it would just be too much chatter."

GPS is also an essential tool because it can be used in a virtual mode to research hotel or store locations and walking routes before walking out the door. Sendero Group's GPS software costs $895.

Another technology that is widely used is the KNFB Reader Mobile, software that enables a cell phone to read printed text aloud through synthesized speech to a blind person. The user puts a piece of paper he wants read on a flat surface (it can be oriented in any direction, even upside down) and takes a photograph of it with his cell phone camera. Within five seconds, the device begins reading the document aloud. The manufacturer, KNFB Reading Technology, plans to release an upgrade in the next few weeks that will enable translation from 16 foreign languages into English. The software costs about $1,000 without the compatible cell phone, or closer to $1,400 with the phone.

"People had been after Apple for a long time to provide accessibility and they didn't," May says. What changed? Last September, the National Federation of the Blind and the Massachusetts attorney general reached an agreement with Apple to make iTunes, Apple's digital music and video application, more accessible for the blind. Now, the program has a speech-enabling check box that allows users to put voice tags on every single song.

"It's exciting as well," says Stevie Wonder, "because it's accessible and for you to be able to hear where you are in the menu to hear, 'OK you're in songs.' And you want to scroll to find the song you want, and after you push the song menu — or if it's albums or if it's books or whatever it is — all in a small thing that you hold in the palm of your hand. It's incredible. And to be able to share that information or your songs — with let's say you're a teenager — to be able to share those songs with your sighted brother or sighted sister, that makes you feel, 'Wow, I'm a part of the visual world and that I'm able to connect.' "

The Apple Nano is the company's only iPod that is user-friendly for the blind and visually impaired, May says. But other third-party devices like the iTell, a wired remote, and the Accenda, a voice controller for the iPod, allow the visually impaired to use other models of the iPod.

Another interesting product that has the potential to make life easier for all consumers — including the blind — is the BlueAnt V1, a voice-controlled Bluetooth headset. It was designed so that you don't need to see it to operate it. There are a variety of voice commands, and the buttons also have good tactile feedback.