Accessibility links
Can Stimulus Funding Help Promote Wellness? The stimulus bill would support programs to promote healthier lifestyles. But an ongoing debate is taking place as to whether these programs would actually save money in the long run. 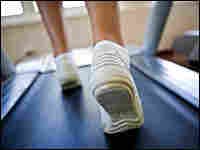 The economic stimulus bill wending its way through Congress includes up to $5.8 billion for disease prevention and wellness initiatives.

But an ongoing debate is taking place as to whether these prevention programs would actually save money in the long run.

The Expense Of Prevention

More than 70 percent of health-care dollars are spent treating a handful of conditions: diabetes, heart disease, asthma and depression.

But often people don't get the evidence-based treatments that are proven to help manage these conditions.

A large clinical trial, for example, that included about 3,000 people who had blood sugar levels in the pre-diabetes range makes this point well. When these people began exercising about two and half hours a week — and shed an average of nine pounds by adopting lower fat and lower sugar diets — they cut their risk of developing type 2 diabetes by more than 50 percent.

These interventions can cost lots of money. The people in the study had access to nutritional counselors and exercise instructors.

But experts say there's a way to scale these programs more efficiently.

"We know how to translate these programs into community settings where they will be less costly and just as effective," says Jeff Levi of the health advocacy organization Trust for America's Health.

Not everyone is sold on the idea that these kinds of investments will stimulate the economy or have long-lasting effects.

Economist John Seater of North Carolina State University says if things like diabetes-prevention programs work, then that's encouraging. But he questions how they would be sustained.

"I'd be very skeptical that a very large fraction of the money the government is talking about spending is going to end up in programs of that would later be so wonderful that people would keep them going on their own without the government," he says.

In the short term, an infusion of cash into community health programs could spur some job creation.

"That's not going to create a lot of jobs," says Russell. "But that's how jobs are going to be created: one at a time."

Lots of research suggests that investments in prevention-oriented initiatives do not save money — particularly in the short term.

"There are plenty of preventive interventions that are good value," says Louise Russell. "They bring good health at a reasonable price."

She cites vaccinations and smoking-cessation programs as two examples.

"But there is very little evidence that it's going to reduce the amount of money we spend on medical care," Russell says.

Trust for America's Health, Jeff Levi's organization, argues that investing in community initiatives could save more than $16 billion annually within five years. This would be a return of $5.60 for every $1 invested.

The group's analysis is published in a report called Prevention for a Healthier America . The group collaborated with economists at the Urban Institute and experts at the New York Academy of Medicine.

Trust for America's Health views the stimulus dollars aimed at prevention as a down payment on health-care reform.