Accessibility links
The Brighton Port Authority: Fatboy Slim Returns : World Cafe Norman Cook, aka Fatboy Slim, presents a "long lost album that never quite got finished"...until now. I Think We're Gonna Need a Bigger Boat, released under the moniker The Brighton Port Authority, features collaborations with the likes of David Byrne, Martha Wainwright and Iggy Pop. The result is a collection of energetic and animated songs that recall a 1970s dance party. 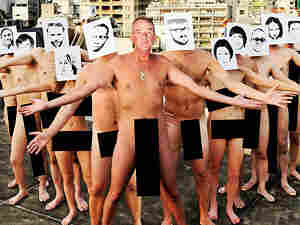 The Brighton Port Authority, built around a word-of-mouth following, is a collaborative musical project created by Simon Thornton and Norman Cook (a.k.a. DJ Fatboy Slim). Its debut album as a collective, I Think We're Gonna Need a Bigger Boat, features a series of popular artists, such as Iggy Pop, Martha Wainwright, Dizzee Rascal and David Byrne. While each artist contributes a bit of his or her own style, the overall '70s house approach ties the entire album together in what the group describes as a "warehouse party, testing synthesizers, shooting fireworks across the bay."

In an interview with host David Dye, Cook describes how these tapes, recorded in the early 1970s to mid-'90s, were lost for years and recently found in a Brighton dockside warehouse.

The BPA's Web Site
The BPA on MySpace