Accessibility links
Listening Is Powerful Medicine It took a scolding from an elderly patient to get Dr. Alicia Conill to look up from her charts and stop to listen. Conill came to understand the value of listening in the treatment process — especially when she herself became the patient. 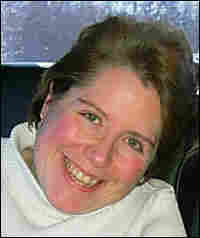 Dr. Alicia Conill is a clinical associate professor at the University of Pennsylvania School of Medicine. A native of Cuba, Conill also directs a nonprofit that teaches patients and caregivers how to better cope with chronic illness and disability. Courtesy Alicia Conill hide caption

I believe listening is powerful medicine.

Studies have shown it takes a physician about 18 seconds to interrupt a patient after he begins talking.

It was Sunday. I had one last patient to see. I approached her room in a hurry and stood at the doorway. She was an older woman, sitting at the edge of the bed, struggling to put socks on her swollen feet. I crossed the threshold, spoke quickly to the nurse, scanned her chart noting she was in stable condition. I was almost in the clear.

I leaned on the bedrail looking down at her. She asked if I could help put on her socks. Instead, I launched into a monologue that went something like this: "How are you feeling? Your sugars and blood pressure were high but they're better today. The nurse mentioned you're anxious to see your son who's visiting you today. It's nice to have family visit from far away. I bet you really look forward to seeing him."

She stopped me with a stern, authoritative voice. "Sit down, doctor. This is my story, not your story."

I was surprised and embarrassed. I sat down. I helped her with the socks. She began to tell me that her only son lived around the corner from her, but she had not seen him in five years. She believed that the stress of this contributed greatly to her health problems. After hearing her story and putting on her socks, I asked if there was anything else I could do for her. She shook her head no and smiled. All she wanted me to do was to listen.

Each story is different. Some are detailed; others are vague. Some have a beginning, middle and end. Others wander without a clear conclusion. Some are true; others not. Yet all those things do not really matter. What matters to the storyteller is that the story is heard — without interruption, assumption or judgment.

Listening to someone's story costs less than expensive diagnostic testing but is key to healing and diagnosis.

I often thought of what that woman taught me, and I reminded myself of the importance of stopping, sitting down and truly listening. And, not long after, in an unexpected twist, I became the patient, with a diagnosis of multiple sclerosis at age 31. Now, 20 years later, I sit all the time — in a wheelchair.

For as long as I could, I continued to see patients from my chair, but I had to resign when my hands were affected. I still teach med students and other health care professionals, but now from the perspective of physician and patient.

I tell them I believe in the power of listening. I tell them I know firsthand that immeasurable healing takes place within me when someone stops, sits down and listens to my story.