Accessibility links
'Dusty': PBS Vet Takes Kids' TV Out Of The Box In 2005, PBS decided not to air an episode of a children's show because it featured a family with gay parents. Now a real-life kids'-TV writer has built a stage play around the story behind the episode that didn't air. 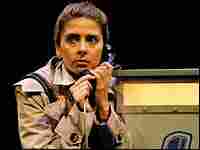 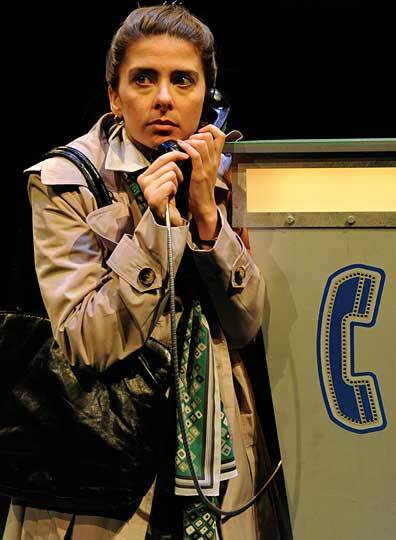 Phone it in: Karen (Jeanine Serralles) relays sensitive information in Dusty and the Big Bad World. 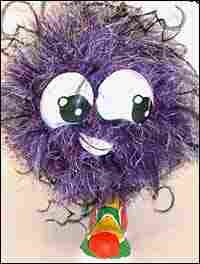 The Denver Center Theatre Company mocked up a Web site for Dusty, the fictional hero of Cusi Cram's new play.

Pay Him A Visit

Scenes From the Play

'Far Bigger Than Myself' 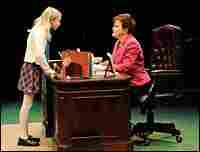 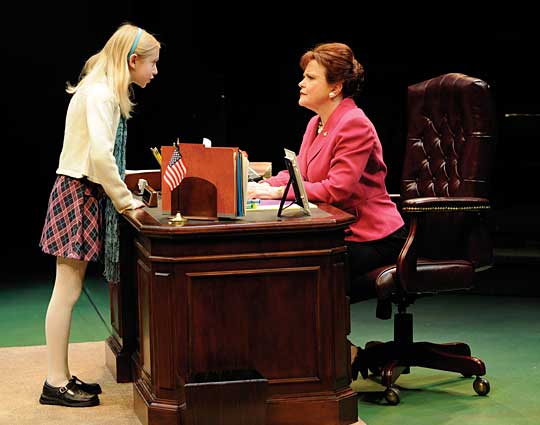 Every so often, public television finds itself at the center of a drama — as it did a few years ago, when a PBS children's show sparked a national fuss with an episode that featured gay parents.

That's the flap that inspired a new play, Dusty and the Big, Bad World, that premieres tonight at the Denver Center Theatre Company.

In the play, the team behind a hit kids' show asks young viewers why Dusty, their animated dust-ball of a hero, should come visit them. An 11-year-old girl with two dads writes in, and when the show goes to her house, trouble soon follows.

Playwright Cusi Cram, who's been been writing for the PBS kids' show Arthur for about 10 years, got the idea in 2005, when colleagues at WGBH in Boston — including her husband, who also writes for children's television — found themselves embroiled in controversy over an episode of the PBS show Postcards from Buster. In an episode called "Sugar Time," Buster visited two Vermont households that were both headed by two moms.

The episode wasn't about the fact that these kids had gay parents; it was about making maple syrup in Vermont. But it ignited a national firestorm.

Then-U.S. Secretary of Education Margaret Spellings sent a threatening letter to PBS President Pat Mitchell. "Many parents," she wrote, "would not want their young children exposed to the lifestyles portrayed in this episode."

Postcards from Buster came up in a Senate hearing. Mitchell testified that it was PBS management who decided not to distribute the episode. And it was that hearing that inspired Cram to write Dusty and the Big Bad World.

"I'm always intrigued by the absurd in storytelling," she says. "You think, 'Buster's this little animated bunny — and somehow something that he did goes to the Senate?' It's very much the stuff of plays."

Now you might think that the villain in Dusty and the Big Bad World would be ... well, the U.S. secretary of education. But although there is that character — loosely inspired by Spellings — she's a little more complicated. She's very thoughtful and charming, but she does plan to use her personal opinions to shape public policy.

Cram tried not to insert her own views into the play; she wants Dusty to make people laugh, as well as to consider the issues.

"What's at stake here is what we teach kids," Cram says. In particular, she wants the audience to worry about that little girl whose TV hero has to turn his back on her.

"What are we telling her about her life," Cram asks. "And how do we talk about these things to kids?"

In a scene towards the end of Dusty and the Big Bad World, that 11-year-old, Lizzie, meets the policymaker who's implied that her family's lifestyle is immoral.

"Sometimes I do wish my family was more traditional," Lizzie tells the education secretary. "Nobody signs on to be an outsider. ... I got something more complicated, but it doesn't mean it's wrong."

Dusty and the Big Bad World runs through the end of February in Denver, but Dusty himself may have a longer life: Cram says she worked so hard on the fictional TV show — the story within the story — that she might eventually turn Dusty into a real-life show for kids.