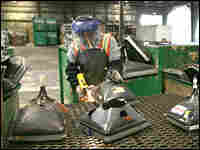 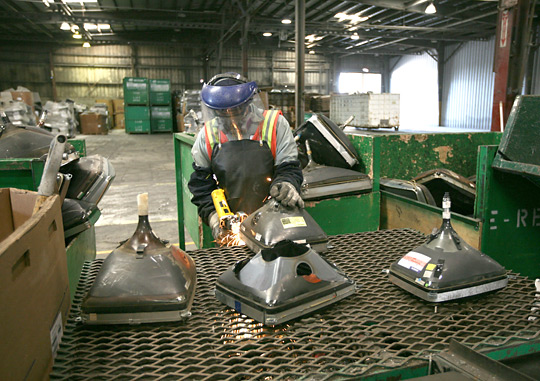 Green Jobs And The 'Big Fix'

President Obama hopes the proposed $800 billion-plus stimulus package can jump-start the economy and lay the groundwork for long-term prosperity. If it doesn't show immediate results, New York Times columnist David Leonhardt says the state of the economy could end up dominating Obama's term.

Some of the current economic trouble is rooted in what Leonhardt calls "investment deficit disorder."

"I think our economy has been far too dependent on consumption over the past couple decades and not dependent enough on investment," he tells NPR's Renee Montagne.

In the 1950s, he says, the government spent the equivalent of about 7 percent of GDP investing in highways, buildings and other infrastructure. But that amount has declined to 4 percent in recent years.

Funding has dwindled in such areas as science, education, roads and bridges, mass transit, and alternative energy. One of the challenges the Obama administration faces is how to fix that at a time when money isn't easy to come by.

But barely two weeks into Obama's term, Leonhardt says he sees an attempt to balance short-term and long-term concerns. The president "clearly has this idea in mind of trying to do more of these investments," he said.

As an example, Leonhardt cites health care provisions in the stimulus package.

The plan will likely include money to ease the transition to electronic medical records. Leonhardt said this is "precisely the kind of investment that can pay real dividends in the long term," by making health care both more efficient and better.

The Glamour Of Green

One area in which the reality might not live up to billing is green jobs. Obama has touted green jobs as a way to cut reliance on foreign oil, improve the environment and boost development of new technologies.

But Leonhardt said it's no panacea: "They've oversold green jobs a little bit."

He notes that the president has talked about green jobs "almost like they're a free lunch — that they will bring a huge economic boom, and they'll bring these environmental and political booms."

Obama's energy policy, according to Leonhardt, is actually aimed at making "dirty energy" more expensive to encourage the use of cleaner energy technology. "And raising the cost of dirty energy isn't a great force for an economic boom," he said.

Looking For A New Engine

Unlike in the past, America isn't relying on a central "engine" to drive the economy.

"The engines we have now don't look like they can be engines for decades to come," Leonhardt says. "I think one of the reasons that people latched on to 'green jobs' is that it's very tangible. But I think it's very hard to know in advance what the engine of the economy is going to be, going forward."

That uncertainty is a challenge in itself — people would much rather believe that whatever industry is fueling the economy will keep doing so in the future.

"More than a hundred years ago, people said it has to be agriculture, and if it's not, we'll end up being poor," Leonhardt said. "And now, a lot of us feel like, 'Well, it has to be manufacturing. Manufacturing is somehow superior to services.' That's not really the case. Services can be better than manufacturing."

Whatever driving force emerges, Leonhardt said, if the U.S. government makes smart investments in a range of areas, then "the economy can in fact do better going forward than it has in the past. But it will be different."

Citing the work of economist Mancur Olson, he said that stable and prosperous countries can get into trouble over time because "interest groups — whether it's Wall Street or whether it's the American Medical Association — end up getting enough power that they are essentially able to benefit at the expense of everyone else."

The recent banking crisis is proof of that theory, Leonhardt said.

"Wall Street was able to go underregulated, and now we're all paying a huge price for that," he noted. "Wall Street benefited from that. People made enormous profits on Wall Street, and many of those profits they'll get to keep."

Leonhardt said the nation's economic crisis presents an unusual chance to challenge some of these interest groups.

Normally, he said, the costs of their activities are too diffuse to engender resistance. But the benefits for the interest groups are great enough that they fight extremely hard to keep them, despite any damage to the national economy.

"So these are the groups that, you hope, a really serious economic crisis like this gives the government — and the rest of us — a chance to take on."