Accessibility links
Grammy Preview: Album Of The Year Ever since the dawn of digital delivery, we've been hearing about how the single-song download is killing the album. But at the Grammy Awards, which take place Sunday night in Los Angeles, there's still a category for Album of the Year. Tom Moon profiles the nominees.

Lovers in Japan/Reign of Love

"Closer" by Ne-Yo
"A Milli" by Lil Wayne 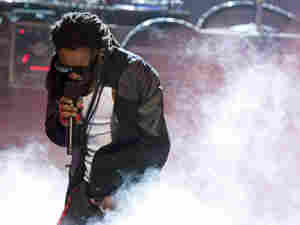 Lil Wayne, whose album Tha Carter III was nominated for a Album of the Year, performs at the 2008 BET Awards. Kevin Winter/Getty Images hide caption

In a world of ringtones and single-song downloads, the album seems like an anachronism. But for musicians, it remains a kind of gold standard, and this year, the Grammys are actually recognizing a bunch of really thoughtful ones. Among them is Tha Carter III, from the prolific New Orleans rapper Lil Wayne. It was 2008's top seller, and it's up for the most Grammy Awards — a total of eight, including Album of the Year.

Lil Wayne has parlayed a string of cameos into hip-hop ubiquity: It's hard to find a hip-hop project that doesn't have him on it. If he's not the best rapper on the planet, as he's boasted, he's certainly one of the hardest working. Tha Carter III provides a welcome contrast to the prevailing "two-hits-plus-filler" approach that's common in hip-hop and elsewhere. It's a concentrated dose of renegade creativity — track after track filled with brainiac rhymes and deceptively sharp commentary.

Lil Wayne faces stiff competition for the Album of the Year Grammy. He's up against another mega-success, Coldplay. The British rock band's fourth album, Viva La Vida, offers the addictive and upbeat pop songs fans have come to expect. But the surroundings are a little different: The arrangements are dense and at times devious. Some consider the album the group's most adventurous work.

The least established artist in the Album of the Year field is Ne-Yo, the Los Angeles R&B singer-songwriter who's written Top 10 hits for Beyonce and Rihanna. Ne-Yo's third release, Year of the Gentleman, is notable for its levelheaded, ever-respectful tone: Here's a man who's not afraid to show a woman his tender side or serenade her with lovely, Stevie Wonder-ish melodies.

Also in the running is Radiohead, the trailblazing British band. It specializes in albums in the old-school sense — with songs that may not be conceptually linked, yet still somehow coalesce into a journey. In Rainbows is an excellent example.

There's one more contender for Album of the Year — Raising Sand, the collaboration between Led Zeppelin vocalist Robert Plant and country/bluegrass singer Alison Krauss. It's a primer on the nearly lost art of harmony singing, an album-length exploration of wistfulness. Check out just one of these beautifully deferential performances and, as so often happens with great albums, you may find it necessary to hear the whole thing.

NOMINEES FROM OTHER CATEGORIES

Record Of The Year

A previous version of this story stated that Radiohead has never been nominated for Album of the Year before. In fact, the band was nominated in 1998 for "OK Computer" and in 2001 for "Kid A."