Accessibility links
Business School Tests Its Own Philosophy As more people lose their jobs, there may be ways for employers to soften the blow. An MBA program near Seattle teaches this style of management, but the school was recently forced to cut a quarter of its staff — and set out to practice what it teaches. 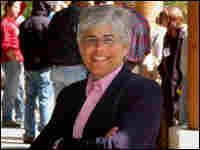 Jill Bamburg, a member of the faculty at the Bainbridge Graduate Institute, helped guide the budget-cutting process for the school. hide caption 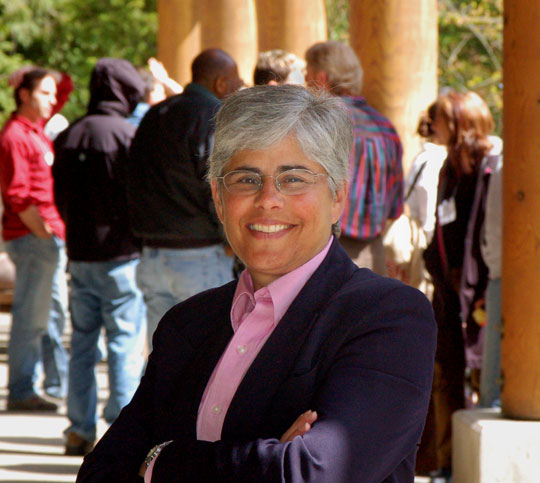 Jill Bamburg, a member of the faculty at the Bainbridge Graduate Institute, helped guide the budget-cutting process for the school.

The Bainbridge Graduate Institute isn't your typical business school. The Seattle-area institute, also known as BGI, offers a degree in sustainable business. Its students call it the "hippy" MBA program.

As the recession wears on, more and more people are losing their jobs. But there may be ways for employers to soften the blow of layoffs. That's what BGI teaches its students. And the school was just forced to test that idea with staff cuts of its own.

"Bainbridge Graduate Institute is devoted to bringing sustainability and social justice into the business curriculum," says Gifford Pinchot, who co-founded the school in 2002. So last fall, when the school faced cuts, it wanted to avoid a so-called "corporate" approach.

"We teach our students the values of transparency and participation," says Jill Bamburg, the former dean who helped guide the budget cuts. "And it's very difficult to maintain those values in a layoff situation. But we did at least try to honor those values as we went through this process."

The school, which in 2008 had about 200 enrolled students and a budget of $6.2 million, needed to trim more than $1 million to make up for a drop in fundraising. Once that target was set, things moved quickly.

A task force, including Bamburg, drafted a plan. The next morning, they called an all-staff meeting.

Then, they did something few businesses would attempt. They came clean and asked for help.

"Everybody knew what we were up against," Bamburg says. "And by getting everybody to work together on the three most desirable choices, which were cut out-of-pocket expenses, cut programs or increase revenue –- that's a great place to harness everybody's energy."

Each department split off to review its own budget.

Sally Metcalf, who had worked at the school less than a year, says she knew her job on the accreditation team was on the line:

"It was a very uncomfortable thing to do. Because I felt as if I'm coming into this room and cutting myself out of a job."

But Metcalf tried to put her own job aside as the staff looked at the numbers.

"People were very much wanting to look at the budget, contribute, find where we can trim. Do the best that we can for the organization," she says.

When the group reconvened, they had collectively found more than a half-million dollars in cuts.

They had saved some jobs. But the budget was still short. Next up was pay cuts: 10 percent for managers, and 20 percent for top officers. That was the last step before layoffs.

All afternoon, the school ombudsman met with employees about staffing needs. Finally, the task force settled on eight people to lay off — a quarter of the staff.

First thing the next morning, managers met privately with people who had been let go. Sally Metcalf was one of them.

"When I went into the room to be laid off, the two people who were talking to me started to cry. You know, that really kind of says it all. 'Sally, we really don't want to see you go. Are you going to be OK?'"

This style of a more personal, compassionate approach to layoffs is something Frank Buysse is seeing more of lately. He's a manager with Lee Hecht Harrison, a global management firm that advises companies about downsizing and layoffs.

"I do see more care about how the message is given," Buysse says. "It really values not just employees, but also their brand as an organization. By doing this right, it will maintain the value of their brand in the community."

What's more rare, Buysse says, is BGI's open and inclusive approach when it came to budget cuts. But he questions whether that would work for bigger companies.

"It may work," Buysse says. "There are some challenges in that, I think. There will be people jockeying for position. And I do see some challenges, especially in public organizations that are traded on Wall Street. I haven't seen it work that way."

People at BGI agree that there's no perfect way to do layoffs. But students there say it's good to learn a new approach, although it's not one they're eager to use.