Accessibility links
Iran Changed 30 Years After Revolution NPR's Steve Inskeep speaks to Scott Simon about the day the Ayatollah's plane landed in Tehran. Iran's economy is bad and at the same time, oil prices, which is a key part of the economy, are down. As a result of all this, some people are reevaluating where Iran goes next, says Inskeep who is reporting from Iran. The government holds lots of power, but Iranians are not the people they were 30 years ago.

NPR's Steve Inskeep speaks to Scott Simon about the day the Ayatollah's plane landed in Tehran. Iran's economy is bad and at the same time, oil prices, which is a key part of the economy, are down. As a result of all this, some people are reevaluating where Iran goes next, says Inskeep who is reporting from Iran. The government holds lots of power, but Iranians are not the people they were 30 years ago.

This is Weekend Edition from NPR News. I'm Scott Simon. Coming up, kinder, gentler layoffs - is that possible?

But first, today Iran begins celebrating the anniversary of its Islamic Revolution. Thirty years ago, 1979, Ayatollah Ruhollah Khomeini returned from exile. Within 10 days, he was in power, replacing an American-backed king with the cleric who denounced the United States. Iran's regime marks the anniversary with a celebration it calls the 10-Day Dawn. It started today at Ayatollah Khomeini's tomb near Tehran. NPR's Steve Inskeep was there.

STEVE INSKEEP: The first thing to know about this shrine is that it's huge. The second, that it's unfinished. There are four giant gold minarets around an unfinished dome. We're beneath the ceiling made of bare steel trusses from which crystal chandeliers hang. A portrait of Ayatollah Khomeini is up on the wall with that famous glower. He's staring right at the camera with dark eyebrows. And far in the back of this huge crowd, we can hear some people getting off a few preliminary chants of "Death to America."

SIMON: Steve Inskeep at Ayatollah Khomeini's tomb earlier today. Steve joins us now from Tehran. And Steve, do the crowds still really chant "Death to America" or is it kind of like just for old times' sake now?

INSKEEP: (Laughing) They do definitely chant it, Scott, but they're very polite about it. There were songs by a military band at this event, and at the end of several of them you heard the chant, "Death to America." We heard it on the streets of Tehran at a demonstration earlier this week, but even at that demonstration, one of the people who was chanting turned around, saw us, saw that we were Westerners, we had microphones, and he said, I'm ready for my interview now.

SIMON: Americans have a set of memories about the Iranian Revolution 30 years ago. What do Iranians remember in speeches and songs today?

INSKEEP: They mark the exact moment that Ayatollah Khomeini's plane touched down. He was returning from exile in France. The Shah of Iran had already fled. Khomeini, who was a leader of the opposition, was coming back in effect to take charge of the country, and the details of this event are recounted the way that American schoolchildren learn to recount the battles of Lexington and Concord and the ride of Paul Revere. They see this as the beginning of a republic and a moment when huge crowds supported Ayatollah Khomeini.

It's worth remembering at a time when this government is not seen as very popular that Khomeini was hugely popular then. He was seen as a figure who altered the history of his country and helped to make it independent from the West. Of course, we should also remember that in those days, Khomeini was promising to include lots of kinds of people in his government, and in the end, he pushed many people out.

SIMON: And help us understand what Iran confronts on its anniversary today.

INSKEEP: Well, this is a time when Iran has a president, Mahmoud Ahmadinejad, who is being criticized at home and abroad. Iran's economy is bad. Inflation is among the highest in the world - as high as 28 percent. The government says it's being pulled down a bit, but it's still quite high. And at the same time, oil prices, which are a key part of the economy for this oil-producing country, are way down. And suddenly, Iran is being forced to discuss cutting back the subsidies that help people pay for things like food and fuel. And as a result of all of this, some people are reevaluating where Iran goes next.

But it's also a moment of great interest, Scott, because of course, there's a new administration in Washington and talk of possibly some new relationship with the United States.

SIMON: And does the Iranian government still have that hold on people we hear in those chants?

INSKEEP: Formally, yes. The government definitely holds all levers of power. They can arrest people who oppose them, and they often do. They jail journalists. They've closed opposition newspapers. But it's difficult, Scott. I was talking this past week with an analyst who said, Iranians are by no standards the people they were 30 years ago. The population is bigger, it's younger, it's better educated, too, and demanding a lot. And that might be symbolized by the coffee shop where I met this person.

There was a sign on the door saying women would not be served unless they were wearing traditional Islamic dress, and there was even a diagram, but inside, women were being served even though they had stretched the rules, stretched the requirement as much as they possibly could.

SIMON: NPR's Steve Inskeep in Tehran. Thanks so much.

INSKEEP: Glad to do it, Scott.

SIMON: Steve will report from Tehran over the next week on Iran 30 years after its revolution. Tomorrow on Weekend Edition Sunday, we'll listen to the voices of Iranian women. They've been the agents of change but are also targets of persecution. 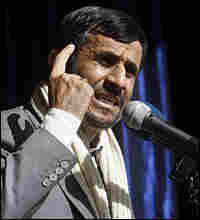 During a speech Jan. 28 in Kermanshah, Iran, Iranian President Mahmoud Ahmadinejad said that U.S. President Barack Obama would have to do more than talk in order to improve contentiousness U.S.-Iran relations. Saman Aqvam/AP/ISNA hide caption 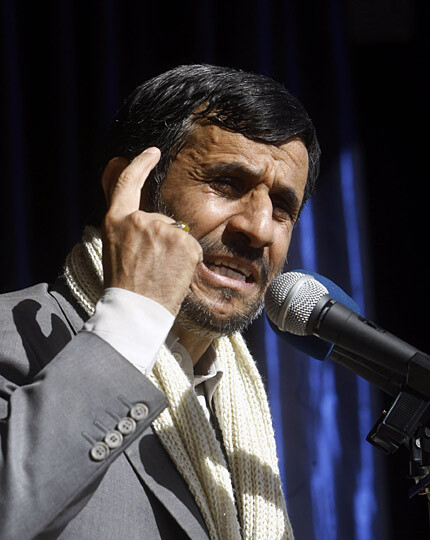 During a speech Jan. 28 in Kermanshah, Iran, Iranian President Mahmoud Ahmadinejad said that U.S. President Barack Obama would have to do more than talk in order to improve contentiousness U.S.-Iran relations.

The United States and Iran already have begun a public dialogue about how to overcome the hostility that has marked their relations for 30 years.

Earlier this week, President Barack Obama said he would reach out a hand to Iran if it "unclenched its fist."

Iran's president wasn't impressed. In a nationally televised speech, Mahmoud Ahmadinejad indicated that the new American president would have to do more than talk to resolve the problems between the two nations.

Still, many Iranians hope their government will respond to the American overtures.

Since Obama's election, there has been uncertainty — if not outright confusion — among Iran's leaders about what to make of him and how to respond to his offers of more open dialogue. Until now.

On Wednesday, Iran's President Ahmadinejad made it clear that as far as he was concerned, the U.S. would have to remove the perceived threat to his nation before Iran could believe the new U.S. president was serious about engagement.

Wherever there is war, Ahmadinejad told a crowd in the western city of Kermanshah, it is either because of America's military presence or America's improper interference. When they say the policy is going to change, Ahmadinejad said, it means they should remove their military forces and take them to their own borders.

Ahmadinejad went on to enumerate a well-known list of grievances that Iran has with the U.S. The U.S. will have to apologize for the CIA-organized coup that put the Shah of Iran back in power in 1953, for backing Saddam Hussein during the Iran-Iraq war of the 1980s and much more, Ahmadinejad said.

Actually in 2000, then-Secretary of State Madeleine Albright did apologize for the 1953 U.S.-backed coup and for supporting Saddam Hussein in his war with Iran.

Ahmadinejad all but overlooked the language of engagement and dialogue that President Obama has used this week.

Conservative supporters of Ahmadinejad were quick to pick up on what they see as the negative comments coming from Washington, especially the all-too-familiar refrain heard here during the past eight years — "all options are on the table" — in connection with Iran's nuclear program.

Mohammed Marandi is a conservative professor of American studies at Tehran University, who argues that leaders in the U.S. must stop demonizing Iran.

"People in Iran were hoping that now that Bush has gone, there may be an opportunity for change. But I think as long as the demonization of Iran continues and threats are made, I don't think that the Iranians will believe that the United States government is really looking for real change with regard to the Middle East and Iran in particular," he says.

Political Change In Iran May Lie Ahead

Within the reformist camp, there is more openness to dialogue with the U.S. But first, says Issa Saharkhiz, a reform-oriented journalist who is banned from publishing in the country, political change must come to Iran as well.

"I think it depends on the next election and who will win in that election," he says.

Ahmadinejad faces re-election in June, and the presidential campaign is only now getting under way. His re-election is not a foregone conclusion because the economy has been damaged by his populist policies. Plus the price of oil has dropped dramatically, and Western financial sanctions have begun to bite.

These are all good reasons why Iran might want to engage with the U.S., say the reformers — and not just the reformers.

Some conservatives have soured on Ahmadinejad as well. Amir Mohebian, a conservative political analyst, would like to see Iran respond to the new American president.

"It makes a new opportunity for the United States, I think, but the Muslim countries and especially Iran, want to see new steps from Mr. Obama," he says.

Mohebian used to support the Ahmadinejad government, but now he has turned critical of its economic and foreign policies. He suggests one step Obama might take is to write personally to Iran's supreme leader, Ayatollah Ali Khamenei.

There have been reports that President Obama is considering such a step, but Thursday the White House said no firm decision has been made yet on just how to approach Iran.