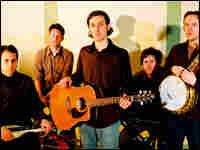 Led by soft-voiced singer Tony Dekker, the Toronto band Great Lake Swimmers specializes in subtle but direct declarations of love amid conflict. Usually moving at a glacial pace, its songs may dabble in metaphor, but there's little doubt about their message or their somber tone. This is haunting, haunted music, made to accompany haunting, haunted storytelling: For an example, try 2005's gorgeous "Various Stages" (audio), on which Dekker sings to an unstable lover.

So what should fans make of "Your Rocky Spine," the lead track from the band's new Ongiara? Propelled by a vaguely mournful but undeniably lilting banjo line, the song sounds positively springy by comparison to its predecessors. Dispensing a travelogue of sorts — it's unclear whether the forbidding land he describes is a metaphor for a lover's body or vice versa — Dekker sighs evocative phrases ("The wind blows a venomous rage through your hair") rather than telling a linear story.

Still, Dekker hasn't abandoned his band's short but grand tradition of marrying sweetness and sorrow: Whether examining someone's tortured psyche or traversing the mountains and lakes of "Your Rocky Spine," he's unafraid to explore forbidden and forbidding terrain.