Accessibility links
U.S. Officials: Al-Qaida Leadership Cadre 'Decimated' CIA-directed airstrikes against al-Qaida in Pakistan over the past six to nine months have been so successful that it is now possible to foresee a "complete al-Qaida defeat" in the mountainous region along the border with Afghanistan, U.S. officials say.

A mechanic inspects an MQ-9 Reaper drone at Creech Air Force Base in Nevada in August 2007. The Reaper, recently introduced to the battleground on the Afghan-Pakistan border, can fly twice as fast and high as the smaller MQ-1 Predators. The aircraft are flown by a pilot and a sensor operator from ground-control stations. Ethan Miller/Getty Images hide caption 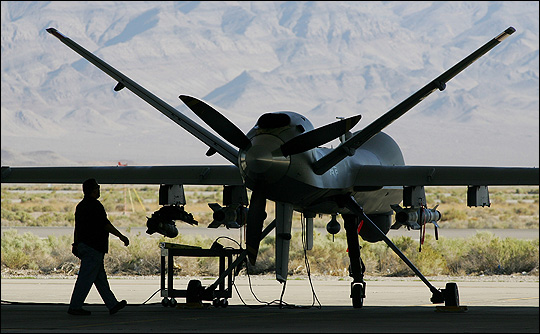 A mechanic inspects an MQ-9 Reaper drone at Creech Air Force Base in Nevada in August 2007. The Reaper, recently introduced to the battleground on the Afghan-Pakistan border, can fly twice as fast and high as the smaller MQ-1 Predators. The aircraft are flown by a pilot and a sensor operator from ground-control stations.

CIA-directed airstrikes against al-Qaida leaders and facilities in Pakistan over the past six to nine months have been so successful, according to senior U.S. officials, that it is now possible to foresee a "complete al-Qaida defeat" in the mountainous region along the border with Afghanistan.

The officials say the terrorist network's leadership cadre has been "decimated," with up to a dozen senior and midlevel operatives killed as a result of the strikes and the remaining leaders reeling from the repeated attacks.

"The enemy is really, really struggling," says one senior U.S. counterterrorism official. "These attacks have produced the broadest, deepest and most rapid reduction in al-Qaida senior leadership that we've seen in several years."

The intelligence reports have been shared with President Barack Obama and underlie his decision to authorize the continued use of unmanned aircraft to launch missile and precision-guided bombs against suspected al-Qaida targets in Pakistan's border region. One such strike was carried out on Jan. 23, just three days after Obama took office.

The CIA has been using drone aircraft to carry out attacks on suspected al-Qaida and Taliban targets in Pakistan for several years, but such attacks were significantly expanded last summer under orders from President George W. Bush. They also became more lethal, with the CIA for the first time using Reaper drones, an enhanced version of the Predator model used previously. The Reaper is capable of carrying two Hellfire missiles, as well as precision-guided bombs.

'Too Early To Declare Victory'

The officials interviewed by NPR asked not to be identified because of sensitivities surrounding the CIA campaign. They also insist it is too early to declare victory in the struggle against al-Qaida in the Afghanistan-Pakistan border region, and they caution that a number of the factors that explain the recent successes could yet be reversed.

The threat of another al-Qaida terrorist attack against the United States has not gone away, they warn, noting that about 100 fighters have already "graduated" from the al-Qaida training camps and are prepared for possible terrorist operations in the West.

"Where those people are and what they're doing, we don't know," says one senior official.

The officials are also careful to say that the weakening of al-Qaida in Pakistan doesn't necessarily extend to the network's operations in other areas, such as in east or north Africa.

Still, the counterterrorism and intelligence officials interviewed for this report say the achievement of the past several months should not be understated.

Such claims could not be independently verified, although Pakistani sources have identified by name a number of foreign militants killed in the border region in recent months.

"We know that they know how bad this is for them," one official says. "We see al-Qaida guessing, trying to figure out how this is happening, and they haven't figured it out yet."

The U.S. officials interviewed for this report attribute the success to improved intelligence on al-Qaida operations in the border area, some of it gathered as a result of "human penetration" of the network.

The officials also report the emergence of some tension between the al-Qaida leadership and local tribal leaders in the border areas. They warn, however, that this tension is, in part, the product of increased Pakistani military activity in the border areas, a development that could be reversed if the Pakistani authorities turn their attention back toward India as a result of tensions stemming from the November attacks in Mumbai.

Al-Qaida Still May Endure And Adapt

The claims of dramatic success against al-Qaida in Pakistan will undoubtedly be met with some skepticism.

"In the past 7 1/2 years, al-Qaida's obituary has been written any number of times," says Bruce Hoffman, a terrorism expert at Georgetown University. "We have to be hesitant in assessing the long-term impact of this kind of damage done to al-Qaida."

Hoffman and other al-Qaida analysts note that the network has demonstrated many times over its ability to endure attacks and adapt to new pressures.

Another question is whether the Pakistani government will demand an end to the drone attacks, which have been roundly denounced by Pakistani political leaders as a violation of their country's sovereignty. For now, however, it appears the Obama administration is determined to continue with the attacks.

In a Senate hearing last week, Defense Secretary Robert Gates was asked to respond to recent criticism of the missile strikes by the Pakistani Foreign Ministry.

"I think that the strikes that are being undertaken are ..." Gates began, but he did not finish the thought. "Let me just say," he continued, "both President Bush and President Obama have made clear that we will go after al-Qaida wherever al-Qaida is. And we will continue to pursue that."