Accessibility links
In Iran, Young And Old Face Economic Struggle A young engaged couple in Tehran say they don't know how they will find the money to move out of their parents' homes. A septuagenarian living with her son says she wants to move to an apartment building with fewer stairs, but can't afford it. They are among the Iranians fighting to get by in a troubled economy. 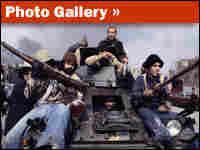 Iran, a nation made rich by oil money, is now struggling with a troubled economy — one that's counted on to support a population of about 70 million.

Most of that population is made up of people under 30, like the two young lovers out for a stroll in Tehran on a recent day who stop before the glittering gold in a jewelry store window. They are shopping for a wedding ring; they plan to marry in two months.

Reza wears a black leather jacket — almost a uniform for young men in Tehran — while Faizah wears loose black clothes of the kind insisted on by the government. As they speak through an interpreter, it becomes clear that they must be marrying for love, since they don't have any money. They can't afford the rings that shine in the store window.

When asked to consider their country's economic and political situation, they say it's definitely not a good time to get married.

Young people like Reza and Faizah, both 24, didn't experience the Islamic Revolution of 30 years ago — when Iranians overthrew an American-backed king — or the years before it. Ali Askar Vafaei, the curator of what's known as the Martyrs Museum, which honors Iranians killed in the 1979 revolution, says younger people don't realize how much Iran's economy has improved since then.

The museum is across the street from the former U.S. Embassy, still standing in Tehran three decades after Iranians seized it and took hostages. It's now used as a school for Iran's Revolutionary Guards. Inside the museum, three floors of display cases show artifacts from decades' worth of Iranian revolts and the Iran-Iraq War.

The curator says Iran's unhappy younger generation is like a fish that is desperate for water, not realizing it's already in the ocean.

The government knows that some people are restless. Islamic morals police move about the city in green and white vans. Opposition newspapers are being shut down.

Reza, the young man admiring wedding rings, says it's risky to talk about how he feels about his country's economy — because there's a possibility someone would overhear. "I have to say it's very good," he says.

Reza, a building superintendent, makes the equivalent of $500 a month. He says his entire salary probably wouldn't pay the rent for a decent Tehran apartment. He and his fiancee aren't sure how they will move out of their parents' homes.

Iranian businessman Bijan Khajedpour is among many who see young people's struggles as a side effect of the 1979 revolution.

"There are some mistakes that you can see. Look at the Iranian demography, for example," he says. "You see immediately that they discontinued birth control policies after the revolution. So in the '80s, we had an explosion ... We had, in mid-'80s, a population growth of almost 4 percent. Exactly that age group of 20 to 30 years now are the bulk of our unemployed population, because we cannot provide jobs for them, so that retrospectively you can see what a big mistake that was."

Since the 1980s, Iran has faced the overriding question of what to do with a population that doubled.

In recent years, President Mahmoud Ahmadinejad promised more jobs and subsidies for the poor. But falling oil revenues made that hard to sustain, and inflation as high as 28 percent canceled out many of the benefits.

The effects of all this are visible in the office of a real estate broker in a working-class section of southern Tehran. The broker, named Talibi, says business was very good until six or seven months ago. That's when Tehran's real estate bubble burst.

Now, he says, almost nobody is buying the properties listed on slips of paper taped to his wall.

A few customers do stop by, including Bimani Tahkhani, an elderly woman looking for an apartment.

When asked about the economy, she says she lives with her son. "We can manage," she says, and leaves the office. Then, several minutes later, she bursts back in the door — to say what she really thinks.

"Greetings to the people of America," she declares, "especially to your new president."

Then she tells her story: Her son is a taxi driver who makes the equivalent of $10 a day, not nearly enough for both of them. She pulls a worn-out shoe off her foot and flings it on the ground. She says she cannot afford a new pair. She's about 70 years old, and the stairs in her apartment building are killing her.

Tahkhani must climb five flights of stairs in all before she reaches the tiny apartment she shares with her son. In a building with no elevator, a top-floor apartment is the cheapest, and she says she can't afford to move.

Iran Claims It Has Launched Satellite Into Orbit Feb. 3, 2009