Accessibility links
Oakland Mayor Fights To Hold City Together Oakland made headlines recently when protests against the fatal shooting of an unarmed black man by a white police officer escalated into violence. But as cities everywhere grapple with a tough economy, racial tension isn't the city's only problem. Oakland Mayor Ron Dellums tells how he's working to keep his city stable.

Oakland made headlines recently when protests against the fatal shooting of an unarmed black man by a white police officer escalated into violence. But as cities everywhere grapple with a tough economy, racial tension isn't the city's only problem. Oakland Mayor Ron Dellums tells how he's working to keep his city stable. 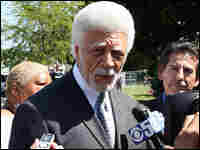 I'm Michel Martin, and this is Tell Me More from NPR News. Coming up, more than a million bankruptcies were filed last year. Our money coach Alvin Hall shares advice on how to navigate this financial minefield.

But first, a newsmaker interview. We head to the West Coast to have another in our series of conversations with mayors and leaders across the country. Today, Ron Dellums, mayor of Oakland, California.

Oakland made headlines recently when protests against the police shooting of 22-year-old Oscar Grant on New Year's Day escalated into street violence, but that is not the mayor's only challenge.

The city has been profoundly affected by the country's economic downturn. The city's unemployment rate is 50 percent above the national average, and the budget deficit is climbing.

Mayor Ron Dellums joins us today from his office in Oakland. Mayor Dellums, welcome to the program. Thanks so much for speaking to us.

Mayor RON DELLUMS (Democrat, Oakland, California): A pleasure to be with you.

And so coming back is not new or strange. But it is different. A because it's not the legislative branch. You're the chief executive officer, so it's the executive branch. And number two, in my opinion, all of the problems ultimately manifest themselves at the local level. People live out their lives, live their hopes and dreams and aspirations in the Oaklands of America. So, at the end of the day, this is where it is.

I used to say maybe being the president is easier than being a mayor. One because the president has an incredible team that the president can put out front. Number two, you can go to Camp David and get away. And number three, you've got resources at your disposal that you can call upon rather quickly, and you can print money in Washington, D.C.

You can't do that in the Bay Area. You have no one that could be your spokesperson. It's in your face, whether it's in the grocery store or walking down the street, and these issues are very much there. So, this is a very difficult job.

MARTIN: And speaking of difficult, this recent situation involving the 22-year-old Oscar Grant who was shot by a Bay Area Rapid Transit Police officer, an incident which was captured on cell phone video by bystanders. And then of course, there was this street protest which erupted into violence as a result. This is the kind of thing that you talked about all the time when you were a member of Congress. Why do you think that happened?

Mayor DELLUMS: Well, first of all, you know, what is very sad and tragic to me is that walking down the streets in the midst of the demonstration to hear people's pain being echoed over and over, that was pain we echoed 40 or 50 years ago, you know. What's wrong with that picture if 40 to 50 years later, we're still dealing with issues of mistrust and of violence and of death of young men of color? This is a sad and tragic thing.

And so, number one, I understood the outrage and the legitimacy of the outrage because when you've taken someone's life in the name of community, community has the right to say this didn't make any sense, that this was over the top, that this could not be justified, that this was hostile, it was aggressive. So, I understand that.

And so, when all of this erupted, I understood the pain, and so the one card that I could play as the mayor, I said to the Oakland police, I want you to begin an immediate investigation into this situation, and investigate this matter just as you would investigate any other homicide in Oakland because Bay Area Rapid Transit had taken jurisdiction.

I believe, my friend, that that move brought everybody to the table, and if you recall, within a matter of days of making that move, the person was arrested and charged with murder. And so the process did speed up, and I think that was important.

MARTIN: One more question on this point before we move on to other issues, but are you surprised, though, that you're still having, we're still having conversations about excessive force, police brutality and so forth when you have an African-American president, African-American mayors of major cities like Oakland, like Washington, D.C.? The conversations that you were having 40 years ago?

Mayor DELLUMS: OK, but number one, this is not just the responsibility of a black president or a black mayor. Young men of color are dying all over this country. Thirteen thousand plus people died last year. Fifteen or 16,000 people died the year before. This is a national epidemic. This is a public health crisis.

Crime and violence, there's a poverty dimension, we've got educational issues. Young men of color tend to be either pushed out or drop out of school and from school to prison becomes a cycle. There's health issues that are related to crime and violence, and how many millions of people have no affordable health care.

So, there are a lot of issues that have to be addressed that ultimately manifest themselves on the streets in the context of race. But at the end of the day, these are issues that have been on the table for a long time, and it's not just about who you elect to office, it's about whether we're committed to deal with these issues.

MARTIN: If you're just joining us, this is Tell Me More from NPR News. And I'm speaking with Ron Dellums, the mayor of Oakland, California.

Mr. Mayor, it's no secret that California is undergoing a severe financial crisis. The governor, Arnold Schwarzenegger, has declared a fiscal emergency. California is facing a $42 billion budget deficit through June of 2010. How is the state situation specifically affecting Oakland, and how are you responding to it?

Mayor DELLUMS: Well, clearly, we're going to lose a significant amount of revenue that normally would have come to us. And I think that that's going to be revenue in the area of education, in the area of health, redevelopment.

So at the end of the day, just suffice to say we're going to be impacted by this. And we have to look to the federal government, in terms of both the state and the local government, to assist us in helping turn this economic situation around.

MARTIN: If the federal government does not provide some support, is Oakland in danger of defaulting? Do you think it's possible Oakland could go bankrupt?

Mayor DELLUMS: Not at this point. I know you're talking to the Oakland mayor, but this is a national problem. Every city in the country, for the most part, are in deficits. So, I don't want to run that red flag up the pole because that's not where we are at this point.

Now, if your question is will that entail some cuts in significant programs? Yes. Does that mean we'll probably end up with laying off people at a time when people really need their jobs? The answer is yes.

And so, without additional help that's going to be a real problem. But even with the stimulus package, that's not going to avert those issues. Those issues are going to have to be confronted in Oakland, in every other city. How do you balance the budget?

MARTIN: As I mentioned at the beginning of our conversation, you're one of 24 mayors who have been asked to work with President Obama and the Congress on an economic recovery plan. Is there anything you can tell us about the kinds of things that you are looking for or that you hope for?

Here's the point. How do you create jobs? In my opinion, jobs are not created in a vacuum. Jobs are the byproduct of a society's commitment to solve problems. In solving the problems, you generate employment. Therein lies the cities. Because as I said to you earlier in this interview, these problems ultimately manifest themselves at the local level.

So, you go down the line on any of these issues. If the issue is jobs, then federal government give money to the cities to solve problems. And in solving the problems, we're going to generate employment, and that's a very clean and straight forward approach.

Mayor DELLUMS: Well, if I had my druthers, I would put every single dollar into problem solving. If the ticket is $750 billion or $850 billion, if it were left to me, I would take every other dime and put it in problem solving.

If America is going to be competitive in the world, we've got to invest in infrastructure, in education, in health care, in research. And the extent to which a nation doesn't put its money there, it's not going to survive. And if we put resources there, that that's going to open up new business opportunities, strengthen our core opportunities and begin to address the problems that I think, ultimately, will generate millions of jobs in this country.

Mayor DELLUMS: I've heard rumors (laughing), you know, but nobody has talked with me about that. I have a job, and it's a very taxing job. But we've tried to paint a vision for Oakland coming together. I think we're right there where we put the architecture together, you know, to really move forward.

I think Oakland is in a prime place to have some influence on the Obama administration because we are trying to create a model. So, I don't think at this particular point that I need to actually be back there to do that.

I want Oakland to be the model city. I want them to bring the federal dollars to Oakland. And if we can show what works in Oakland, we can export it to other cities in the country. We're prepared to lead from that perspective.

MARTIN: Ron Dellums is the mayor of Oakland, California. He was kind enough to join us from his office. Mr. Mayor, thank you so much for speaking with us.

Mayor DELLUMS: Absolutely. It was a pleasure to be with you. We'll do it again some time.