Accessibility links
Ahmadinejad Faces Challenges From Left And Right Iranians go to the polls in June to choose their next leader, and President Mahmoud Ahmadinejad's re-election bid is anything but certain. Mohammad Khatami, a reformist and ex-president, appears ready to enter the race, while Ahmadinejad has lost the support of some conservatives. 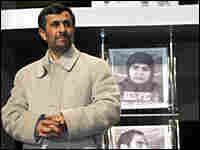 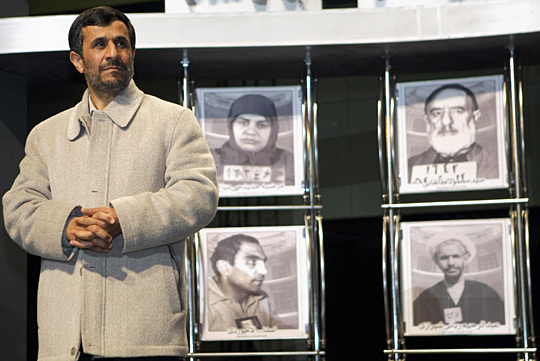 Iranian President Mahmoud Ahmadinejad attends a ceremony in Tehran, Iran, on Jan. 29 to honor political prisoners held during the regime of the Shah of Iran. Ahmadinejad faces a tough battle in upcoming presidential elections, slated for June.

In June, Iranian voters go to the polls to choose their next president. The election will almost certainly become a referendum on the controversial economic and foreign policies of current President Mahmoud Ahmadinejad.

But it also may determine whether Iran sees a comeback for reformist politics and the return of Mohammad Khatami, the once-popular president who preceded Ahmadinejad.

The outcome of the presidential election is anything but certain. That's the view of many ordinary citizens in Iran and many of the analysts and activists watching the maneuvering of various candidates that is even now under way.

Ibrahim Yazdi, a longtime reformist politician in Iran, was Iran's foreign minister for a short period after the 1979 Islamic revolution.

"There are many serious objections to the deeds of Ahmadinejad, even among the very fundamental conservatives who are backing him," Yazdi says. "Therefore, his future is a little bit shaky."

And for Yazdi, along with many in the reformist camp, the big question is whether former President Khatami runs again.

Khatami was the popular reformer who was president from 1997 to 2005. His presidency galvanized the movement for political reform in Iran, but he was frequently stymied by the conservative clerical institutions that hold great power in Iran.

When Khatami left office, he left behind a strong feeling of disappointment and disillusionment, and the reform movement has been wounded and weak since then.

Now, says editor Issa Saharkhiz, four years of Ahmadinejad have convinced the highly splintered reform movement to coalesce around anyone who could defeat the conservative president.

"Most of the people and most of the reformists are pragmatists. The best situation for Iran is putting away Mr. Ahmadinejad," Saharkhiz says.

Most reformers agree that the candidate who stands the best chance of doing that is former President Khatami.

Khatami is seriously considering joining the race. He meets nearly every day with advisers to discuss the pros and cons. He is known to believe that Ahmadinejad's economic and foreign policies have been bad for the country. He believes Iran had more respect internationally during his administration.

It is widely believed that Khatami would pose a serious challenge to Ahmadinejad and, says Saharkhiz, that has caused concern among top clerics, including Iran's supreme leader, Ayatollah Ali Khamenei.

There is a great deal of pressure on Khatami from the highest levels in the country, says Saharkhiz.

There is also the question of whether Khatami would even be permitted to run. The Guardian Council, dominated by conservative jurists and religious figures, has the final say over who can run for office, and has often disqualified reformist candidates.

Those who know Khatami say he believes the council wouldn't dare disqualify him.

Still, the mood of the voters is hard to read. Reliable polling is not available, so there are just educated guesses, often tainted by wishful thinking. One big issue is city vs. village in Iran — city voters being better educated and tending toward the liberal side; village voters more conservative.

Mohammed Atrianfar, a reform journalist, believes that the chaotic economic policies of Ahmadinejad, which have pushed inflation above 25 percent and seen unemployment grow, have cost him much support.

"Even in the suburbs and in the villages and in the poor areas, he had a lot of supporters. We think that he has lost a lot of them," Atrianfar says.

Conservative Vote Could Be Splintered

It's not just the reformers who see Ahmadinejad's vulnerability. Many conservatives have come to be critical of the controversial Iranian president.

Iran's presidential election has two rounds. There could be as many as half a dozen or more candidates in the first round. The top two vote-getters advance to the second round. If the top two include Ahmadinejad and another conservative, Ahmadinejad will have trouble, says conservative analyst Amir Mohebian.

He notes that the rival would receive the votes of conservatives disgruntled with Ahmadinejad, as well as those of reformists, who oppose the current president.

So, the political dynamic in Iran is in flux and could take a dramatic and unexpected turn when Iranians go to the polls June 12.