Accessibility links
Tax Woes Derail Daschle's Bid For Health Chief Former Senate Majority Leader Tom Daschle has withdrawn as President Obama's choice to serve as secretary of health and human services, saying he didn't want to be a distraction to the new administration. Daschle recently revealed he had paid $140,000 in late taxes and penalties. 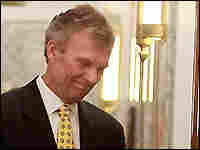 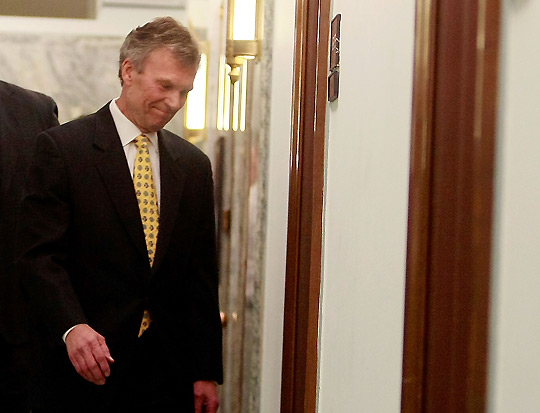 Tom Daschle withdrew his name from consideration as President Obama's nominee for secretary of health and human services on Tuesday amid questions over his failure to pay more than $140,000 in back taxes and interest.

Daschle's decision came hours after another Obama nominee — former Treasury official Nancy Killefer — announced she was withdrawing her name from consideration for the nation's first chief performance officer because of her own tax problems.

In a statement, Daschle said his years in public service have taught him that revamping the nation's health care system requires a secretary who has the full support of Congress and the American people.

"Right now, I am not that leader. ... The focus of Congress should be on the urgent business of moving the president's economic agenda forward, including affordable health care for every American," Daschle said. "I will not be the architect of America's health system reform, but I remain one of its most fervent [supporters]."

The president accepted Daschle's withdrawal. "Now, we must move forward," Obama said in a written statement.

"Tom made a mistake, which he has openly acknowledged," Obama said. "He has not excused it, nor do I. But that mistake and this decision cannot diminish the many contributions Tom has made to this country."

Daschle had been up for two administration posts, HHS chief and White House health care czar. His decision to step aside came as a surprise on Capitol Hill. On Monday, Obama, Vice President Biden and Senate Democrats said they would stand behind Daschle despite the tax problems and questions about potential conflicts of interest.

Questions about Daschle began swirling last month when the former Senate Democratic leader filed amended returns for 2005-2007 to report $128,203 in back taxes and $11,964 in interest. He owed the money because a friend had provided him with chauffeur service for three years. An aide said Daschle had paid both amounts.

Daschle also faced questions about potential conflicts of interest because of speaking fees he accepted from health care businesses. The former South Dakota senator also had received payments from insurers and hospitals through his work at a law firm after losing his seat in 2004.

Daschle is the third Obama administration nominee to have tax problems.

Treasury Secretary Timothy Geithner's confirmation was held up over his failure to pay more than $48,000 in back taxes and interest. He apologized and paid the taxes, but Republicans took him to task during Senate hearings.

Although Killefer's tax bill was far less, she withdrew on Tuesday from consideriation to become chief performance officer, a position intended to increase government efficiency and eliminate waste.

Killefer stated in her withdrawal letter to Obama that she didn't want her tax problem with the District of Columbia government to be a "distraction."

"I recognize that your agenda and the duties facing your chief performance officer are urgent," she wrote. "I have also come to realize in the current environment that my personal tax issue of D.C. unemployment tax could be used to create exactly the kind of distraction and delay those duties must avoid. Because of this, I must reluctantly ask you to withdraw my name from consideration."

The Associated Press reported in January that the District of Columbia government had filed a $946.69 lien on Killefer's home in 2005 for failure to pay unemployment compensation taxes on her household help.

White House press secretary Robert Gibbs said Daschle and Killefer made the decision to step aside on their own.

"I think they both realize you can't set an example of responsibility but accept a different standard in who serves," Gibbs said. "They both decided and recognized nominations will distract from important goals and the critical agenda the president put forward."

Last month, Obama's initial choice for commerce secretary, New Mexico Gov. Bill Richardson, withdrew his name from consideration because of an investigation into a state contract awarded to his political donors.