Accessibility links
Iranians Weigh Ahmadinejad's Election Chances In June, Iran will decide if it will keep or replace President Mahmoud Ahmadinejad, who has been the country's public face for almost four years. Opinions of Ahmadinejad differ, and he will face opposition — perhaps from former President Mohammad Khatami (left). 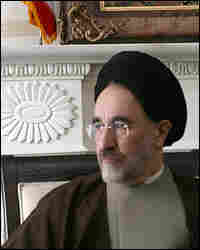 Former Iranian President Mohammad Khatami has not announced whether he will seek to replace Mahmoud Ahmadinejad. NPR hide caption 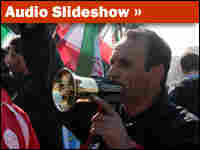 Learn About Staged Protests In Iran

In June, Iran will decide if it will keep or replace President Mahmoud Ahmadinejad, who has been the country's public face for almost four years.

In the West, Ahmadinejad is known for defiant remarks about Israel and the Holocaust. For instance, he demanded last week that the United States apologize to Iran for past wrongs.

But in Tehran, Ahmadinejad is often blamed for a fading economy.

But Ahmadinejad does have opponents. One of them is Mehdi Karrubi, a Muslim cleric who is running for the presidency. Karrubi is a reformist — a group that wants to make Iran more open.

Warming himself by a glassed-in fireplace, Karrubi said that the only way Ahmadinejad could be beaten is by a large voter turnout. If there is a normal turnout, those in power will stay there, he said.

More high-profile names may soon join the presidential race. And their challenge may generate the popular support Karrubi considers essential.

Journalist and analyst Seyed Laylaz knows that many people in this country gave up on politics long ago.

Laylaz says that some voters have chosen to ignore the election. Consider Bimani Tahkhani, an elderly woman who lives in a working-class part of Tehran.

Through an interpreter, she denounced the economy and said she was desperately poor. But she also said that she would never participate in an election.

On a recent day, a young building manager and his fiancee were window-shopping for wedding rings they can't afford.

Asked if he voted four years ago, Reza, the husband-to-be, said, "Until now I have not participated in any election."

Reza said he goes to the polls to get his ID card stamped as a voter. The stamp keeps him in good standing with the authorities. But, he said, he never marks down a candidate.

"I don't believe, and I don't approve, the foundation, the basis of these elections," he said in Farsi. "And now they will execute us," he said with a laugh.

That would please one Iranian: the part owner of a jewelry store, who gave his name as Mohammad, who said he prefers Khatami. He had more freedom under the former leader, who left office in 2005, Mohammad said.

There is widespread anticipation that Khatami might seek office again. In fact, the driver of a car passing the gate of Khatami's office rolled down his window to yell out in Farsi, "Did he decide to run yet?"

But Khatami is granting no interviews. He is telling visitors that while he is reluctant to run, he thinks the next president could make a difference.

For Khatami to become that president, he would have to challenge a powerful system. The sitting president, Mahmoud Ahmadinejad, still has support at Iran's Martyrs Museum.

The museum's curator, Ali Askar Vafaei, said this week that he is not worried about the economy — and that he will vote to re-elect President Ahmadinejad.

"I have to tell you that we Iranian people are the people of the hard time," Vafaei said in Farsi. And they can survive the hard times, he said — if they preserve Islam's values.