Accessibility links
Innovation Seen As Key To Curbing Climate Change An analysis of the world's greenhouse gas emissions shows the energy plans outlined in Obama's stimulus package are merely a down payment. Raising the price tag on fossil fuel costs is not enough to curb global warming, experts say. 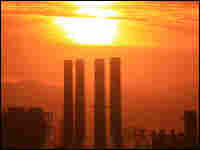 The Obama administration has very ambitious plans for confronting climate change: billions of dollars targeted toward energy and climate in the stimulus package are just a tiny down payment.

But a sobering analysis shows even the most ambitious aspirations fall far short of what's needed. And that has led some people to suggest that the world needs to take a whole new approach to climate change.

First, the challenge is immense. President Obama has set a goal of slashing our greenhouse gas emissions by 80 percent between now and the middle of the century. That means phasing out most fossil fuels or going to the vast expense of burying carbon dioxide underground.

Robert Corell at the Heinz Center in Washington, D.C. asks a simple question: What if the United States is able to meet that goal? And what if Europe meets it, too? Corell notes that China isn't planning to reduce its greenhouse gas emissions, but it does plan to constrain their growth.

Corell uses a simple laptop computer program, developed by MIT and the University of Pennsylvania, to get quick answers to scenarios like this.

And here's the bad news: Even if the G-8 industrialized nations and developing nations such as China and India all met their climate goals, the planet still warms.

Now, an 80 percent reduction in greenhouse gas emissions sounds so ambitious, many people assume that if we could achieve that level, we would solve the problem of climate change.

"Absolutely not so," says Corell.

So, what, then would it take to solve the problem? Many scientists say that the amount of carbon dioxide in the air should be no more than 400 parts per million. That's already a big increase over pre-industrial levels and portends several degrees of temperature rise, but it's much less likely to have catastrophic consequences.

One way to achieve this level would be to get the eight leading industrialized countries — as well as China, India, Mexico and South America — to all adopt the same ambitious target.

"And here's what you find: It takes about a 5 percent reduction [by all these nations] per year," Corell says, starting next year and achieving those enormous cuts year after year after year.

"Five percent per year is huge," he says.

As just one point of comparison, California has one of the most ambitious greenhouse gas control plans in the nation, yet emissions there are still going up, not down.

Corell says it would require global investments of tens of trillions of dollars in the coming decades. And the U.S. doesn't just need to spend the money itself, it needs to convince China and India to follow suit. If this sounds more than daunting, well that's the point of the laptop computer simulation.

"This is sort of a wake-up call mechanism," Corell says. People need to realize, "Oh, this is tougher than I thought. And I probably have to think about it differently."

One person pushing for an intellectual paradigm shift is Dan Sarewitz of Arizona State University. It's his view that our only hope is to invent our way out of the problem.

Using energy "is really the metabolism of modern industrial society," he says. "And changing that system is not about replacing a few technologies or advancing our level of efficiency along certain fronts."

It means creating a whole new basis for the global economy. Sarewitz is skeptical that politicians can deliberately manage a transformation of that scale, either through legislation or through climate treaties. He says, for starters, measures that will ultimately force everyone to pay more for energy are doomed both economically and politically.

"Politically, what you're asking people to do is to pay a huge upfront cost for benefits many decades down the road that they can't even anticipate or predict. And that is politically an extremely difficult sort of situation to manage," Sarewitz says.

It's harder still, considering that Americans rank global warming at the bottom of their worry list, according to a January poll by the Pew Research Center for People and the Press.

And even if the public became passionate about climate change, Sarewitz says, it's hard to imagine how they would warm to the idea of making carbon-emitting fuels prohibitively expensive. Just try to imagine how much that would cost.

"The economic dislocation that would be created by getting to that sort of level would absolutely be immense," he says. "And it's easy to be casual about that or it's easy to pin that kind of argument on conservative Republicans or on the executives of oil corporations, but nevertheless it is absolutely true you would be talking about something that would be destabilizing to global economies."

Despite this gloomy perspective, Sarewitz isn't a naysayer or a cynic. But he has been trying to think of another way to deal with climate change. To do that, he's looked back in history to see how we managed other major transformations. One example is how America transformed agriculture over the past century. The United States government created a highly successful, century-long effort to make food more abundant and affordable.

"And it didn't do so by setting any particular target or timetable. It did so by investing in research and development — and very importantly, in institutions," Sarewitz says.

For example, agricultural extension programs brought together researchers to tackle the big problems, and farmers to put the solutions to work quickly. The key to it all was speeding up innovation. And the good news is none of this required an ugly political or public debate. That's the model Sarewitz would like to use for climate change.

"The idea really is to take the political heat off of climate change and instead move this into the realm of policy wonkdom," he says, "where many many small decisions made across many agencies, many types of policies, many domains, set the conditions for moving in the right direction without demanding that people accept that this is the most important problem in the world."

Sarewitz is now hard at work trying to identify what institutions we need to drive that transformation in the coming decades. The ultimate goal is to make renewable energy about as cheap as fossil fuels. Otherwise, there's little hope that the nations of the world will agree to tackle climate change. Sarewitz says he knows the Obama administration won't abandon its current path to craft climate laws and a treaty.

"But there's no reason they can't at the same time... understand that the real action is going to be on the innovation front," Sarewitz says.

And, he adds, there's no time to lose.