Accessibility links
Steve Martin: Comedian Takes Banjo Seriously For longtime fans who remember his stand-up act from the '70s, Steve Martin's love for the banjo is not that surprising. Early in his career, Martin's often manic routine included satirical songs ("Ramblin' Guy" or "Grandmother's Song") performed on the banjo, used more as a prop for his comedic delivery. Martin rediscovers his musical side with a new album, The Crow: New Songs for the Five-String Banjo. 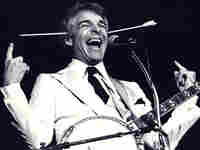 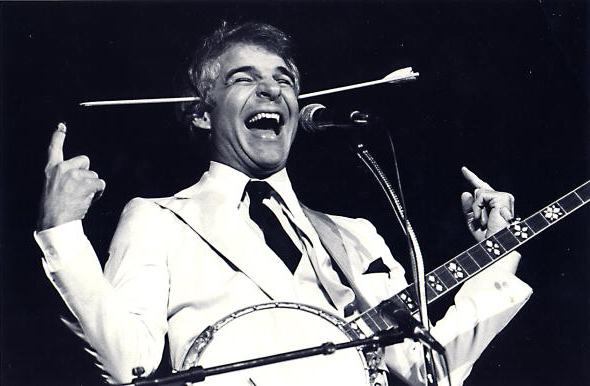 Songs from 'The Crow' 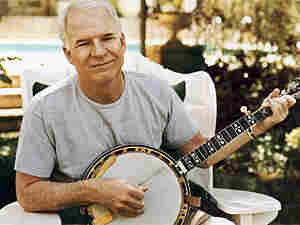 Steve Martin shows off his musical side with an album of banjo songs called The Crow: New Songs for the Five-String Banjo. Courtesy of Steve Martin hide caption

For longtime fans who remember his stand-up act from the '70s, Steve Martin's love for the banjo is not that surprising. Early in his career, Martin's often manic routine included satirical songs ("Ramblin' Guy" and "Grandmother's Song") performed on the banjo, used more as a prop for his comedy. The stand-up comedian and actor turned playwright and novella author is better known for his classic films and recent memoir, but Martin's mastery of the instrument, while less celebrated, is certainly unquestioned.

After a collaboration with bluegrass legend Earl Scruggs in 2001, Martin rediscovered the instrument and wrote the song "The Crow," which appeared on Tony Trischka's 2007 album Double Banjo Bluegrass Spectacular. That song became Martin's first hit single since 1978's "King Tut." He has since written many more songs that appear on his new album, The Crow: New Songs for the Five-String Banjo. In an interview with All Things Considered host Melissa Block, Martin describes what he loves about the banjo.

"The thing about the banjo," says Martin, "is when you first hear it, it strikes many people as 'What's that?' There's something very compelling about it to certain people; that's the way I was, that's the way a lot of banjo players and people who love the banjo are. I'd like to think it's because we're Americans and the banjo is truly an American instrument, and it captures something about our past."

Martin admits that, for some, the banjo might be an acquired taste.

"It's like jazz," he says. "I had a friend, and I asked him, 'What kind of music do you like?' He said 'ABC.' I said, 'What does that mean?' And he said 'anything but classical.' So, I think there are some ABJ people and some ABB people out there."

Martin first heard the banjo in the mid-1960s. He was influenced by many folk artists — including The Kingston Trio, The Dillards, Pete Seeger and Scruggs — as well as the theme to The Beverly Hillbillies and the song "Foggy Mountain Breakdown," which was used as the theme for Bonnie and Clyde.

Martin says he was 17 when he first decided to pick up the instrument and teach himself to play.

"I can't tell you if it was hard," says Martin, "because I didn't have anything to compare it with. I got some books — Earl Scruggs' book on how to play the banjo, [and] I got Pete Seeger's book. Another technique, once you got some fundamentals down, was to take 33 rpm records and slow them down to 16 and tune the banjo down — so it would be in the same tune — and pick it out note by note."

Martin honed his expertise of various banjo styles, such as "three-finger" picking, made famous by Scruggs, and "clawhammer" — also known as "frailing" — a style known for its syncopated rhythms and distinct melodic phrasing that employs the back of the fingernails to strike or strum the strings, and a thumb technique that alternates between the strings.

"[While] these categories can really overlap in mood, I think of three-finger as driving and staccato, and I think of frailing as moody and melancholy. Although there's very happy frailing songs and very sad three-finger songs."

Banjo On And Off Stage

Over the years, Martin used his banjo in his comedy. But there is another side of him that clearly takes the music seriously.

"When I first started doing my comedy act," Martin explains, "I just desperately needed material. So I took literally everything I knew how to do on stage with me, which was juggling, magic and banjo and my little comedy routines. I always felt the audience sorta tolerated the serious musical parts while I was doing my comedy.

"I just have an affection for it offstage and the sounds it can make. It's like listening to a mystery when you hear some people play. I just say, 'I have no idea how they do that.' It's magic, and it's beautiful."