Accessibility links
Movie Review: 'Coraline' - An Updated Trip Down The Rabbit Hole When an 11-year-old finds a portal to an alternate universe, her dull life gets a lot more animated. But things aren't what they seem — and Coraline must rely on her wits to escape. 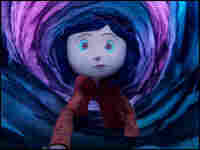 Analog Portal: Bored in her bland new home, 11-year-old Coraline crawls through a tunnel into an adventure.

'I'm Your Other Mother'

'I'm Way Too Old For Dolls'

Handy Man: Other Father — the head of an alternate-universe family Coraline discovers at the other end of that tunnel — makes a grab for her. LAIKA Inc./Focus Features hide caption

Handy Man: Other Father — the head of an alternate-universe family Coraline discovers at the other end of that tunnel — makes a grab for her.

When her family moves to a big old country house in Oregon, 11-year-old Coraline Jones is less than thrilled. In fact, at the start of the stop-motion animated film that bears her name, Coraline is actively bored.

So she goes exploring and finds a bricked-up trapdoor. Returning to it when she hears a noise that night, she finds not bricks, but a tunnel — one that seems to lead to the same room it starts in, which is a little weird.

But what's far weirder is that Coraline appears to have a whole other family on the other side of the door — a family that's a lot more fun than the one she's used to, except for one flaw: They all have black buttons for eyes.

Otherwise, the button-eyed side of the trapdoor is pretty cool; it's brighter, happier, more fun. On that side, Coraline gets what she thinks she's been wanting — more attention, more engagement, more emotion. But it turns out to be something less than the joyfest she was expecting.

In children's stories, the grass often seems greener on the other side of some metaphorical fence, and then of course it turns out not to be. Think Alice popping down her rabbit hole, or Dorothy blown over the rainbow, or the Pevensie kids leaping through that wardrobe into Narnia.

Novelist Neil Gaiman had something similar in mind for Coraline, who's forever plunging into things, and director Henry Selick delights in making those plunges physical. The movie's stop-motion work is plenty impressive in 2-D, which is how it's being shown in about half of the theaters it's been booked into.

But this is the first stop-motion film to be actually conceived in 3-D, so it's worth finding a theater playing it that way, so you can get the full effect as Selick pulls the camera back into corners to make rooms loom larger, and deeper, and on the far side of that trapdoor, scarier.

He'll peer up from below at a spinning chandelier dispensing mango milkshakes or down from on high at scurrying bugs and mice, using wide-angle camera work with a sort of video-gamey feel.

Which you'd think would seem crazily artificial. But it doesn't, because Selick puts his real faith not in the gimmickry that Coraline's audiences will think they've shown up for, but in the stronger virtues that they'd likely view as old-fashioned: character, and story, and handmade figures, handmade milkshakes, handmade blades of grass, each one moving utterly persuasively as he and his animators tweak it, frame by frame.