Accessibility links
Liberal View On Stimulus: James Galbraith As the Senate takes up President Obama's stimulus bill, economists of all stripes are debating its merits. One of them, James Galbraith of the University of Texas, offers his view about whether the stimulus package goes far enough.

As the Senate takes up President Obama's stimulus bill, economists of all stripes are debating its merits. One of them, James Galbraith of the University of Texas, offers his view on the stimulus package to Madeleine Brand. 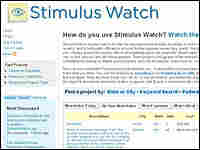 StimulusWatch.org is an effort by George Mason University's Mercatus Center to detail "shovel ready" projects that U.S. mayors have put on their stimulus wish list. The Obama administration plans its own project-tracking site at www.recovery.gov once Congress finishes the stimulus legislation. hide caption 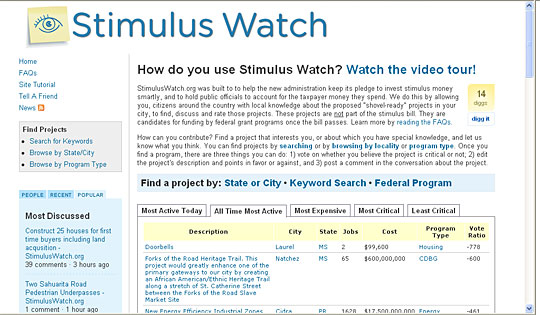 StimulusWatch.org is an effort by George Mason University's Mercatus Center to detail "shovel ready" projects that U.S. mayors have put on their stimulus wish list. The Obama administration plans its own project-tracking site at www.recovery.gov once Congress finishes the stimulus legislation.

Americans appear to be strongly behind some version of the spending and tax-cut stimulus plan working its way through Congress. A new Gallup Poll shows that three-quarters of those surveyed support the effort, though more than one-third think major changes to the nearly $1 trillion bill are needed before it hits President Obama's desk.

But how can these taxpayers, pessimistic enough about their economic futures that they're willing to get behind a massive and hugely expensive proposal, be reassured they won't be TARP'ed again?

After all, the public remains in the dark about just how the money was spent from the first $350 billion distributed from the taxpayer-funded Troubled Assets Relief Program, sold as essential to easing the credit crunch and preventing home foreclosures. What is known is that many of the Wall Street institutions that received TARP funds gave out huge bonuses and are very likely using the money to improve their own bottom lines.

The transparency requirements, however, won't help taxpayers trying to track spending proposals being debated in Congress: As part of the current bill, the provisions aren't finalized and wouldn't kick in until Congress and the president agree to a final stimulus measure.

Under Obama's proposal, spending planned in the final stimulus package would be published on a Web site that would detail specific projects. Along with the projects' purpose and rationale, the site would also offer a buck-stops-here list of state or local officials who signed off on the plan. Anyone with access to a computer could find out where his tax dollars are going and, as important, for what.

"The transparency requirements are way beyond what we've ever seen before on federal spending," says Craig Jennings, a fiscal policy analyst with OMB Watch, a nonprofit group dedicated to increasing government transparency and accountability. "It's impressive."

The proposals, says Ryan Alexander of Taxpayers for Common Sense, represent "a new way of doing business," made possible by technology.

There have been watchdog Web sites before, says John Wonderlich of the Sunlight Foundation, "but this makes it the standard."

The administration also promises to post on its stimulus Web site periodic project spending reviews conducted by both the inspector general and the Government Accountability Office.

Visitors to the Web site now are advised to check back after Congress finishes the stimulus legislation, which the president wants on his desk by midmonth. A House version was approved last week, with Obama's transparency provisions largely intact. The Senate is debating its version of the bill.

The administration may want to take its online cue from the folks at George Mason University's Mercatus Center, which this week launched its own project-tracking Web site. It details the "shovel ready" projects that members of the U.S. Conference of Mayors have put on their stimulus wish list.

The administration has said it wants to move quickly by funding worthy shovel-ready projects — those that have been designed, approved and met eligibility and environmental requirements and are ready to be bid on and under way within 90 days of the bill's signing. The mayors' list has $73 billion-plus in shovel-ready projects that they say would create about 850,000 jobs; the National Governors Association has its own wish list totaling about $136 billion.

Their projects will be among those competing for stimulus money funneled through federal grant programs distributed by government agencies.

"Hopefully, the administration will have a site like ours and publish every single detail of these projects," says Jerry Brito, a senior research fellow at the center who started the online project.

"With the TARP money, there was not only zero transparency, there was obfuscation," says Brito, whose research focus is government transparency and accountability. He says he believes the site will jump-start citizen participation. "You can't have a democracy unless folks are informed."

At the site, visitors can search their state and cities for details on the projects proposed by members of the U.S. Conference of Mayors — including the number of jobs the project would ostensibly create.

It's set up as a wiki, which means visitors can edit the content themselves. Brito says the hope is that local taxpayers will comment on projects ranging from highway tunnels to dog parks being proposed in their areas, and explain — or debunk — why the work is needed.

Click on San Diego, for example, and a visitor would see a proposed $20 million project for a "Downtown Quiet Zone." One online visitor posted the details: "Contrary to popular belief," the visitor wrote, "this is not a project to hire out-of-work librarians and have them walk around downtown saying SHHHHH." It's a proposal to reconfigure rail crossings to cut down on the frequency that trains blow their horns.

"It's amazing what happens when you're transparent," says Brito, whose research extends to using the Internet to crowd source — seeking the eyeballs and opinions of a large group of people — to keep politicians accountable.

Mandating How Funds Are Used

There are transparency stumbling blocks inherent to the way the government always doles out big money, however.

Though some grants must be spent on a designated project — weatherization money on weatherization, and highway money on highways — funds authorized for Medicare and education can be redirected for other general fund purposes, says Raymond Scheppach, executive director of the National Governors Association.

That makes tracking money that would flow to states and cities in education and Medicare block grants much more difficult, Scheppach says. And some of the money comes with spend-or-lose rules, which could encourage spending on quick-fix, budget-balancing efforts instead of projects that would stimulate local economies.

The trick for the Obama administration — and for Congress — will be to live up to its transparency promises in an environment where money would be spent at great speed and in historically vast amounts.

"It's a really ambitious and challenging plan," says Alexander of Taxpayers for Common Sense.

"We don't have the experience to know whether it's going to work, not only because of the speed and amount involved, but because we have never asked for coordinated transparency like this across agencies, across all levels of government," she says.

Success won't just depend on the office of the president. It also will depend on the will of agencies, states and everyone up and down the money trail, Ryan says.

Including, of course, the taxpayer. And let's not forget the media: It was the New York Post that first reported that Citibank, which received $45 billion in TARP money, planned to buy a $50 million corporate jet.

A little public attention, and the deal was off.