Accessibility links
Work Of Independent Journalist Stymied By Tehran Iranian writer and editor Issa Saharkhiz is deeply involved with reformist politics and is a critic of the Islamic republic and its leaders. He has been brought to court for his journalism, and his passport has been seized. Still, he remains in Iran and hopes to continue his work. 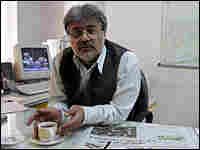 Journalist Issa Saharkhiz is deeply involved in reformist politics and is a critic of the Iranian government. He is pictured here in February 2004, when he ran his own newspaper, the daily Economic News. At the time, Saharkhiz had worked on numerous publications that had been closed by Iran's judiciary. Two years ago, he lost this paper as well. Mike Shuster/NPR hide caption 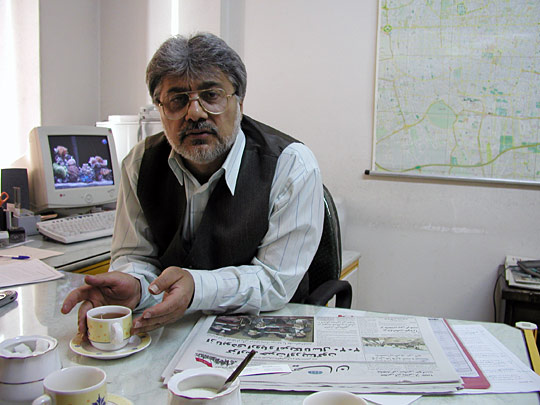 Journalist Issa Saharkhiz is deeply involved in reformist politics and is a critic of the Iranian government. He is pictured here in February 2004, when he ran his own newspaper, the daily Economic News. At the time, Saharkhiz had worked on numerous publications that had been closed by Iran's judiciary. Two years ago, he lost this paper as well.

More On The Series

Iran is a complicated nation; it is isolated and yet active in the world, ruled by religious tradition yet modern in many ways. In this series, NPR listens to what Iranians are saying, from those in coffee shops to those who hold power, examining Iran's politics, economy and controversial nuclear program.

Depending on which newspaper they read, Iranians may be getting very different perspectives on world events. NPR talks to two journalists at opposite ends of the ideological spectrum — one who edits the conservative Kayhan, which backs Iran's regime, and another who has worked for numerous reformist publications, all of which have been closed by the Iranian authorities.

Issa Saharkhiz is out of work. Two years ago, Iranian authorities shut down two popular publications that he ran: the daily Economic News and a monthly intellectual magazine called Aftab, or Sun.

Saharkhiz is a well-known journalist in Iran, an editor and writer deeply involved with reformist politics and often quite critical of the Islamic republic and its leaders.

This was hardly the first time Saharkhiz's work had been shut down.

"I worked for almost 10 papers during the last eight years. Unfortunately, all of them were closed by the court or the government. Two years ago, they sent me to ... court," Saharkhiz recalls. The punishment meted out included four years in jail, a five-year ban on press activity and closure of the two publications.

Iran has a special court for the press, and it's the mechanism the Iranian government has used to control the press.

The court shut Saharkhiz down the last time because he gave a speech in which he praised the student movement of 1999 and criticized Iran's supreme leader. The court accused one of his papers of working for America and being an enemy of Iran.

Saharkhiz wasn't the only journalist who has clashed with the authorities, he readily admits.

The government closed almost all the independent papers as well as those that covered reformist issues, he says.

Independent journalists in Iran have been struggling to keep their papers going for at least a decade — not just since Mahmoud Ahmadinejad became president four years ago.

Dozens of magazines and newspapers were shut down during the much more tolerant administration of Mohammed Khatami, from 1997 to 2005. The judiciary in Iran is independent of the president, and Khatami was unable to prevent the court's action against the press.

Now, there are only two newspapers that could be called independent or moderately reformist, and they steer a careful path to keep clear of the court.

And it's not just journalism that is struggling in Iran, says Saharkhiz, noting that the government has pressured or closed many independent women and students groups.

Many years ago, Saharkhiz worked for the government's Ministry of Islamic Guidance and Culture, overseeing the press.

Now, a prison sentence hangs over his head, imposed by the press court. So far, he has been able to stay out of a jail cell. It's not clear why he has not been forced to serve his four-year sentence.

Perhaps the authorities feel that banning him from journalism is the best punishment, although he still writes for Web sites both in and outside Iran.

They have also taken his passport, so he cannot travel. He says they would return it if he agreed to leave the country for good. Other journalists and activists have left the country, but Saharkhiz refuses to do that.