Accessibility links
Study: Hormone Use Doubles Breast Cancer Risk A study published this week in the New England Journal of Medicine finds that women who take combined hormone therapy, estrogen and progestin, for at least five years double their risk of breast cancer. But, researchers say, women on hormones can significantly reduce their risk of breast cancer by stopping the therapy. 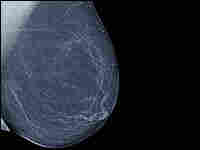 While some experts proposed the decline in breast cancer diagnoses was linked to mammogram practices, a new study points to the fact that fewer women are using combined hormone replacement therapy. iStockphoto.com hide caption

New evidence suggests that the decline in the use of hormone therapy may be tied to a dip in the number of women diagnosed with breast cancer.

A study published this week in the New England Journal of Medicine finds that women who take combined hormone therapy — estrogen and progestin — for at least five years double their risk of breast cancer.

The study — a follow-up to earlier Women's Health Initiative research — also says mammogram practices have little, if anything, to do with the decline in the number of women diagnosed with breast cancer.

Use Of Hormone Therapy Plummets

The thinking of the day was that combination hormone therapy was good for protecting everything from your bones to your heart, says Dr. Deborah Armstrong of the Johns Hopkins University Kimmel Comprehensive Cancer Center.

"People thought there really wasn't a problem," she says.

But in 2002, the results of a landmark Women's Health Initiative randomized clinical trial found that women taking Prempro, a combination of estrogen and progestin hormone therapy, were at significantly higher risk of breast cancer and heart problems compared to women who were taking a placebo. The study included approximately 16,000 women between the ages of 50 and 79.

Doubling The Risk Of Breast Cancer

The new study, finding that women who take combined hormone therapy for five years or more are at greater risk of breast cancer, is a follow-up to the original Women's Health Initiative research.

The good news is that women on hormones can significantly reduce their risks of breast cancer by stopping the therapy.

Unlike past studies, says Manson, this study looked at the role of mammographic practices in detail in an effort to understand whether the frequency of mammograms contributed to the reduced risk of breast cancer.

"It was clear that the reduction in risk of breast cancer was related to the decreased use of hormone therapy," says Manson. "And was minimally — if at all — effected by changes in mammogram screening practices."

Women who have hysterectomies are often prescribed estrogen-only therapy. They don't need progestin because they no longer have a uterus.

It's important for women to understand the differences between combination therapy and estrogen only, says Marcia Stefanick of the Stanford Prevention Research Center.

"We really do have two different situations for menopausal hormones," she says.

A study by the Women's Health Initiative evaluated the effect of estrogen therapy for women who had their uteruses removed.

"We did not see an increase in breast cancer when women went on the estrogen-only pills," says Stefanick.

Experts say that combination hormone therapy, which uses estrogen and progestin, remains a viable option for women with severe menopausal symptoms such as night sweats and trouble sleeping.

"Women should talk with their doctors about taking the lowest effective dose for the shortest duration of time," says Manson.