Accessibility links
Imagining A City Without Its Daily Newspaper In many cities around the country, the only major newspaper in town is losing money. Financial analysts say they expect some big dailies to fold. But what would it mean for a city if its newspaper were to disappear? In Hartford, Conn., some say they would lose a sense of community.

Listen
Imagining A City Without Its Daily Newspaper

This story is the first in a two-part series about the future of newspapers. The second story considers a nonprofit model of journalism. 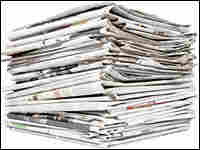 Financial analysts say they expect some big dailies to fold, perhaps as soon as this year. But what would it mean for a city if its newspaper were to disappear? iStockphoto.com hide caption 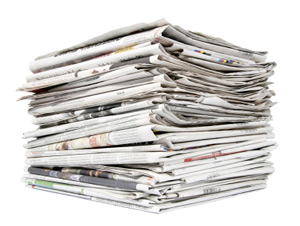 Financial analysts say they expect some big dailies to fold, perhaps as soon as this year. But what would it mean for a city if its newspaper were to disappear?

In cities around the country, such as Atlanta and San Francisco, the major newspaper in town is losing money. Financial analysts say they expect some big dailies to fold, perhaps as soon as this year.

But what would it mean for a city if its newspaper were to disappear?

Take a place like Hartford, Conn. — a poor city in a rich state, home to the state government and three of the largest companies in the country. A few hundred thousand people start each day with the Hartford Courant.

"I read most of the whole paper, you know, when I get a chance to — basically keeping up with what's happening in the town itself, you know, like layoffs, because that's a big part of the news today," Robert Brown says over breakfast at Papa's Diner downtown.

Job losses are especially big news for Brown, who was just laid off by the city's sanitation department after 11 years.

Without the newspaper, "you get street gossip and stuff like that. But that's not good news," Brown says. "I don't really believe in gossip. What I read, you know, is better than word of mouth."

A few blocks away, at a cigar bar in the city's financial center, an out-of-work IT professional named Bruce Salisbury is drawing deeply while surfing the Web on his laptop.

"Right now, I'm looking for a new position," he says, "and the thought hasn't even occurred to me to pick up the Hartford Courant to look in the jobs section. Everything is online. It's online; it's fast; it's immediate."

People are becoming more like Salisbury every day. That's threatening to papers like the Courant, which is the nation's oldest continuously published newspaper — older even than the Declaration of Independence. So let's let the Courant stand in for all papers facing tough times and take a moment to imagine Connecticut without it.

He describes the Courant's reporting as "old-fashioned muckraking, finding out that there was corruption. The bad guys go to prison; the system's changed, reformed — you know, the sort of basic American tableau of what a good newspaper does at its best."

Hartford's mayor has just been indicted on bribery charges, and the Courant was out ahead on that, too. The paper has exposed polluters and the deployment of mentally ill soldiers to Iraq. But it's not just pursuing hard news.

Julie Stapf, marketing director for the Hartford Stage — a well-regarded regional theater — says the coverage and the advertising in the paper combine to drive ticket sales.

"Even a bad review is important to us, frankly, because it still brings awareness to the community about what we're doing here at the theater," she says.

To be clear, there's no reason to believe the Courant will close. But circulation and advertising revenues are down; its corporate owner, the Tribune Co., has filed for bankruptcy protection; and the Courant is a lot thinner than it used to be. Its newsroom staff is roughly half the size it was a decade ago.

The Courant's top editor, Clifford Teutsch, didn't respond to requests to talk for this story. But people around town, such as Trinity College President James F. Jones Jr., are following the paper's fate closely.

"The New York Times is not going to write about the local basketball teams or the local color stories or, in our case, what is happening on the educational front in Hartford," Jones says.

A Sense Of Community

In the State House press room, unopened mail was piled high on the desk set aside for The New York Times on a recent day. The Times stopped covering Hartford altogether last year. Some in-state dailies no longer send reporters either. The retreat by other news organizations makes even the diminished Courant more relevant than ever.

"There is not a news organization that doesn't check the paper in the morning to find out what they missed," says Tom Monahan, a reporter for the local NBC station. "And, chances are, you know, smaller outfits — smaller radio stations, smaller newspapers, even us — we're not staffed the way a newspaper is."

Some promising blogs have emerged around the state, but on the best-known one covering politics, CTNewsJunkie.com, most postings are written by the same person.

Mark Pazniokas has been a reporter at the Courant for 24 years and offers a warning were his paper to disappear.

"You lose a sense of community," Pazniokas says. "If everybody is looking at dozens or hundreds of different news sources, you don't have the common point of reference that — not to be corny — [is] an important part of democracy and community."

Again, the Hartford Courant is not in any particular danger — no more, that is, than any other paper around the country facing precarious finances and a killer economy.

In the second part of this series, David Folkenflik examines the debate over whether news organizations would do better to forget about profits altogether.