Accessibility links
Looking For Political Messages In Tehran Prayers In Iran, Friday prayers often start with a spiritual lesson and end with current events. This was true last Friday, when the sermon was delivered by Iran's former President Hashemi Rafsanjani. 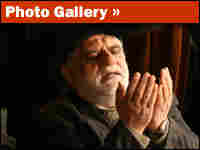 If one is looking for clues to whether Iran wants to deal with the United States over issues like its nuclear program, one place to start is at Friday prayers in Tehran.

Thousands gather in rows beneath a metal roof at Tehran University. It's hard to overstate the power of seeing every man in unison put his forehead to the ground.

What do these prayers have to do with Iran's nuclear program?

In Iran, Friday prayers often start with a spiritual lesson and end with current events. This was true last Friday, when the sermon was delivered by Iran's former President Hashemi Rafsanjani. He had a bearing that commanded attention. He had to wait for his supporters to stop chanting.

Rafsanjani was dressed in modest grays and browns but with a hint of elegance. He began with a religious lesson. Later, he spoke of Iran's nuclear program and directly addressed the United States.

"You are claiming that if Iran wants to end its isolation, Iran has to suspend its nuclear activities or remain in isolation," he said. "If you are talking about changes, we expect that you will first change your policies toward us. We want you to take the first step and make a fair, rational, logical proposal for resolving the nuclear issue with Iran."

Do that, Rafsanjani said, and then Iran can help the U.S. resolve the instability in the region. The former president's remarks set off speculation.

He remains a high official, with access to Iran's Supreme Leader Ayatollah Ali Khamenei. A Tehran journalist, Said Laylaz, saw much meaning in that call for the U.S. to make a "fair" proposal.

"And when, for example, somebody like Mr. Hashemi Rafsanjani says something about the U.S. and negotiation, he's a representative of Mr. Khamenei," he said.

One diplomat, though, noted Rafsanjani's demand that the U.S. change its policies. And other analysts ask if Rafsanjani really speaks for Iran's supreme leader at all.

In a book about Iran, the writer Afshin Molavi reports that the religious part of the sermon often reinforces the political message.

In his sermon, Rafsanjani spoke of the Islamic rule that Muslims must pray while facing Mecca. He observed that if Muslims miss the target a little bit — aiming a little to the right or the left — it's OK; their prayers will still be accepted.

It leaves the question as to whether this famously pragmatic cleric is making a subtle suggestion. A suggestion that it's OK for Iran to be flexible in talks with the United States. Or maybe it's just Rafsanjani's musings on the nature of Islam.

The former president never made it clear. He stepped down from the pulpit and took his place before the other worshipers — turning his face toward Mecca to pray.